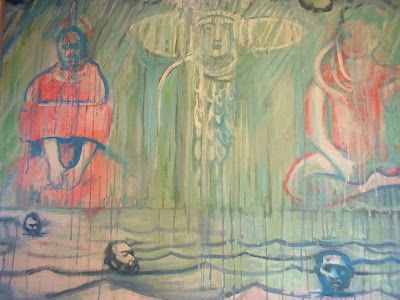 Recommended shows for the new year


I begin my recommendations of art shows for the New Year with a reminder of a couple of ongoing shows at Tacoma Art Museum and Museum of Glass.

The Movement of Impressionism: Europe, America, and the Northwest continues at TAM. The exhibition features artwork by many well-known French impressionists including Edgar Degas, Pierre-Auguste Renoir, and Camille Pissarro, as well as impressionists from other European countries, most notably James McNeill Whistler, and American artists including Mary Cassatt and John Singer Sargent.

There are some heavy hitters in this show, along with names most Americans — myself included — have never heard of. (Watch for my review of this show in next week's Visual Edge.)

MOG is continuing their mid career retrospective of Preston Singletary, one of the best known glass artists in the Pacific Northwest. From a museum press release: “For nearly two decades, Singletary has melded the symbols, patterns and legends of his Tlingit heritage with the dynamism of the Studio Glass movement, creating a distinctive and powerful body of work.”

OK, those are the big shows at the big museums. For local art I highly recommend the latest shows at the Minnaert Center Art Gallery at South Puget Sound Community College and Mineral in Tacoma.

SPSCC is featuring a solo show by Steven Suski, which I’m pretty sure is his first solo show in a major venue. I’ve kept up with Suski’s work off and on for more than 20 years. His works in the recent SPSCC juried exhibition were among the most interesting I’ve ever seen. (The winner of the annual juried show — Suski this year — is always granted a solo show the following year.) The gallery describes his work as an exploration of myth and magic. His images are highly personalized and idiosyncratic. In my review of his works in the juried show I described two of his paintings as “sweet little paintings” with “an exciting tension between figure and ground,” and a larger work called "Big Pig" as “an iconic image with the appearance of an ancient fresco that is scarred and worn.”

Mineral’s latest showing is TINY: New Works by Chris Sharp. Sharp was a winner of the first Foundation Award and is locally known for logos created for businesses including Satellite Coffee, the Rosewood Café, the Hub Restaurant, Tacoma Bike, and Black Water Café.

“Typically illustrative and sentimental paintings weird me out,” Sharp says.

Based on images sent out with the press release, which are the only works I have to go on, this should be a really good show. These are small works that are loose and sketchy. The media was not identified, but they looked like wet-on-wet watercolors that were very direct and unpretentious.

These shows should get South Sound art lovers off to a good start for 2010.

I recently came accross your blog and have been reading along. I thought I would leave my first comment. I dont know what to say except that I have enjoyed reading. Nice blog. I will keep visiting this blog very often.
Alisha
http://sketchingdrawing.com