Now playing at Harlequin Productions is the Alan Ball comedy Five Women Wearing the Same Dress.  Known for dark and sophisticated comedies such as the film American Beauty and the HBO series “Six Feet Under” and “True Blood,” Ball has given us lighter fare with Five Woman. But there are moments of darkness and high seriousness scattered throughout this light romantic comedy. There is talk of abortion and there are graphic discussions of sex; fundamentalist Christians are condemned, and the F-bomb frequently explodes.

Set during a wedding reception in the Southern city of Knoxville, Tenn., it could be any suburban setting, as these Southern belles are quite metropolitan, sophisticated and definitely unconventional.

Five bridesmaids try to escape the tedium of a wedding reception by hiding out in the bedroom of Meredith (Maggie Lofquist), the bride's sarcastic, pot-smoking younger sister. As they come and go, get drunk, and talk to each other, their many loves, hurts and foibles are exposed.

Georgeanne (Lorrie Fargo) may be the most jaded of the five, and the drunkest. Being in a wedding is painful for her because her own marriage is on the rocks, and this doubly painful wedding reminds her that she once aborted a child fathered by the groom.

Trisha (Laura Hanson) admits, rather casually, to having slept with close to a hundred men. She’s funny, down-to-earth and compassionate.

Frances (Korja Giles) is the youngest of the bridesmaids. She is innocent, naive, and a fundamentalist Christian who is saving herself for marriage. The other women poke fun at her until the teasing erupts into a bitter squabble about religion. Mindy (Devin Rodger), is the groom’s wisecracking lesbian sister who may be the most feminine of the five women, having gone to charm school and been in beauty pageants — her take-off on a beauty pageant contestant is one of the funniest bits in the play.


Ball’s writing is witty, and all five of the women actors are outstanding. They inhabit their characters naturally. There is also one male actor, Bruce Haasl, who appears in only one brief scene near the end, but he is entertaining as the womanizer Tripp, who proves some hidden depth to his character.

Although written in 1993, Harlequin has updated the play to include references to contemporary news events such as the killing of Travon Martin. Meredith has a poster on her wall with Travon’s picture, and she is berated for being an armchair activist, spouting radical causes but not willing to get out on the streets in demonstrations.

Kudos to Aaron Lamb for a commendable job in his directing debut.

Coming up: reviews of Hollywood Who Done It at Pelligrino's Event Center and Last of the Red Hot Lovers at Olympia Little Theatre.


Readers of this blog have surely already seen the announcements on the “Freedom Players” reading of The Freedom Trilogy at the Olympia Library on Sept. 12. But just in case you missed it, here it is again.

The trilogy comprises my novels The Backside of Nowhere and Return to Freedom, and the third book, a work in progress called Visual Liberties. I have adapted scenes from each of the three books for a stage reading that, combined, will be like a one act play that runs approximately half an hour.

The Backside of Nowhere is the story of movie star David Lawrence who comes back home to Freedom, Return to Freedom follows up with some of the same characters three years later and focuses on Malcolm Ashton and Sonny Staples, teenage hoodlums in the first book now all grown up. Sonny is a born-again preacher with an eye for teenage girls, especially Malcolm’s daughter Molly. The third book, Visual Liberties, follows Molly as she goes to college and gets involved with her art teacher, Darren Strong, and a fellow student, Francis Gossing.

Mississippi and ends up trapped in the old family home during a hurricane with his dying father, the county sheriff (who is a lifelong enemy) and his former high school sweetheart.
Reading various parts will be some of the best actors in Olympia. Here’s a scene-by-scene breakdown of who is doing which parts:

Dennis Rolly will be the narrator and will play Freight Train Taylor and Malcolm Ashton in the first scene only.

The reading starts promptly at 7:30 p.m. There will be a question-and-answer period after and book signing. It takes place at the downtown Olympia public library.
Posted by Alec Clayton at 1:42 PM 1 comment:

Spinning vinyl at B2 Gallery

The American Vinyl Exhibition at B2

Musical performances during openings at B2 Fine Art Gallery are nothing new, but the gallery is branching out into music in a big way with the first of a two-part series of art celebrating music. SPIN 1: American Vinyl Exhibition is the first of two shows with portraits of musicians in photography and paint augmented with vinyl records to buy, sell and trade; gallery talks and musical performances throughout the duration of the exhibition. This first show focuses on gospel, blues, country and folk, and includes art and photography celebrating giants of music from Woody Gutherie and Robert Johnson to Dylan. SPIN II will follow in the summer or 2014 covering, jazz, rock and contemporary musical genres.

The featured artworks consist mostly of portraits of musicians and include giclée prints from acrylic paintings by William Walts, watercolors and acrylics by David Lloyd Glover, photos by Robert Marovich and Jeff Jaisun, and paintings by Randy Leo Frechette.

From Walts are prints from paintings of Johnny winters, Bob Dylan, Janice Joplin, B.B. King and others. Particularly strong are his paintings of Warren Haynes and of John Lee Hooker.

Glover provides watercolors of Muddy Waters and Sam Lightning Hopkins and an acrylic of the legendary Robert Johnson.

The show is important more as a documentary or archive of musical history and memorabilia than as fine art. Most of the work has a commercial or illustrational quality. As interesting as the artworks are, the music is even more interesting, as gallery owners Gary and Deborah Boone play vintage vinyl recordings throughout the show. Plus there are videos featuring blues legends and museum-like displays of old record players, and stacks and stacks of album covers visitors can thumb through just as in a record store. In fact, they have in many ways turned the gallery into a music store. And guess what? There is vinyl inside the covers, and they will play them for you, and they’re for sale.

One of the most memorable pieces in the show is a photo of Dr. John that was in New Orleans during Hurricane Katrina and is marred by water damage from the hurricane.

Also shown are abstract paintings by Judy Hentz Cox. They are excellent paintings unrelated to the themes of the show.

Musical performances in the gallery in conjunction with this show include a gospel extravaganza Sept. 20 and a country and folk hoedown Oct. 4. Both shows begin at 8 p.m. There is a $10 cover.

Posted by Alec Clayton at 7:58 AM No comments:

Hollywood Who Done It


Pellegrino's Italian Kitchen is celebrating their 10th anniversary this summer with a mystery dinner theater. 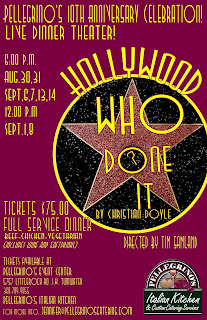 Tickets $75 for the play and a full service dinner

Posted by Alec Clayton at 4:41 PM No comments:

During the Renaissance artists learned their craft by spending countless hours in museums painstakingly copying the works of earlier masters. That kind of dedication and discipline is rare today, but we see it in Paris Reid’s paintings, a few of which are now on display at Olyphant Art Supply in Olympia (thanks to Tom Anderson for calling my attention to this show).
I have never heard of Reid and know nothing about her. Is she new to Olympia? Is she self-taught or has she formal art training? Are these paintings nothing more than copies or is there something about them that is unique to Reid? I suspect she is on a learning curve and headed toward finding her personal take on what she has learned from studying the masters. Her technique is astounding.

She reminds me of local artist Lisa Sweet, whom I have often reviewed in this column, and who is a few steps further along that path. Reid is getting there.

There are six paintings in her show at Olyphant, most are in the style of Flemish or Italian Renaissance painters or other classical masters, the one exception being a portrait of Jimi Hendrix done in the psychedelic style of art represented by the ’60s and ’70s rock posters on display in the same gallery space — meaning she fits the style to the subject, an intelligent approach to art.

Her painting “Francesco Hayez Master Study ‘The Kiss’” is an almost exact copy of a painting called “The Kiss” by the 19th century romantic artist Francesco Hayez. The colors tend more toward the yellow end of the spectrum, but that could be misleading because I’ve seen Hayez’ painting only in reproduction. Reid’s painting is softer, and the textures on the wall and clothing are more subdued; I like her painting better than the original.

Her painting “David Gray Master Study ‘Muse’” is a copy of a painting by a contemporary artist who paints in the style of the old masters — David Gray is from Tacoma and studied at PLU.
“Flemish Mondrian” is a unique homage to contrasting styles. It is a portrait of a woman in the style of the Flemish masters standing in front of a wall covered with decorative floral patterns, and on the wall is a framed painting by the modern master Piet Mondrian. The wall paper is collaged onto the canvas; or maybe I should say pasted on just as wall paper is pasted to walls. That is a modernist twist that reflects the manner in which Picasso and Braque used collage.
She is also showing a self-portrait, confirming my suspicion that she is a young artist, and a study of a horse taken after a study by Da Vinci.

My only complaints with this show are first, that I wish there were twice as many paintings in it, and second, the guitar strings in the Hendrix portrait are too gimmicky. They are real strings attached to the painting.

The psychedelic rock posters are from the collection of Tom Anderson and are posters from concerts at the Fillmore West in San Francisco circa 1969-70.

Posted by Alec Clayton at 4:19 PM No comments: