‘The (one act) Play That Goes Wrong’ at BOP 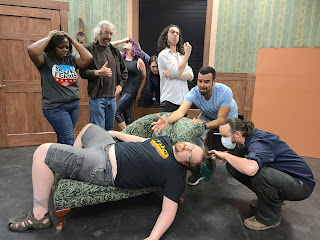 If you’ve read OLY ARTS, you know that BOP and TAO have merged to bring Olympia top notch stage musicals, comedies and drama. You probably already know that BOP is Broadway Olympia Productions now located in Olympia’s Capital Mall and TAO is Theater Artists Olympia. If their first joint production, The (one act) Play That Goes Wrong is any indication, the merger of these two companies is going to be a roaring success.

Comedies about inept theater companies producing disastrous plays has become so ubiquitous that they deserve to be in a genre all their own. There are musicals, dramas, comedies, romantic musical-comedy-dramas; and now plays about plays (usually farces) that go wrong—with actors who forget their lines, run into props, walls and into other actors; and props that fall apart, doors and windows that won’t open or close, and things that fall off walls.

The (one act) Play That Goes Wrong, directed by Pug Bujeaud, has all of this and more, and, despite the genre, it is all unexpected. And the acting is great.

Unlike other plays about plays, this one has no backstage scenes; there are no love affairs between the actors, no backstory. There is nothing but the play within the play. Or to put it more succinctly, there is nothing but the play. The “director” (Xander Layden) walks onto the stage and welcomes the audience with a short curtain speech, and the play, a 1920s murder mystery called The Murder at Haversham Manor, begins. Almost immediately, Charles Haversham (Josh Palmer) is murdered on the day before his wedding to Florence Colleymore (Heather Christopher), who is having an affair with Charles’s brother Cecil (Sebastian Cintron). As in most good murder mysteries, a police inspector is called in and everybody is locked in the house, and they all know that someone in the house is the murderer.

Beyond this setup, there is nothing I can reveal about the story that won’t ruin some delicious surprises.

Also starring George Blanchard as the butler, Marko Bujeaud as the lighting and sound guy who is missing his Duran Duran CD, Robert McConkey as Florence’s brother, and Andrea Weston-Smart as Annie, the stage manager.

Michael Christopher and Marko Bujeaud did a marvelous job designing a beautiful set that does things inanimate objects shouldn’t do.

This might be the funniest play you’ll see all year.

Masks are required at all shows.

Posted by Alec Clayton at 2:24 PM No comments: