Few theater companies in the world have ever produced a long-running series of plays such as Harlequin Production’s Stardust series. Stardust is a series of stage musicals set during Christmas, mostly in the same New York nightclub, with loosely connected stories covering a decade in the lives of many of the same characters. Each “episode” has been written by Harlowe Reed and features a galaxy of the best and most popular of local actors across generations, beginning in 1993.

Read this history of Stardust on thurstontalk.com
Posted by Alec Clayton at 7:39 AM No comments:

Everybody knows not to look a gift horse in the mouth. Tacoma Art Museum certainly does. In this case, the gift horse is a bucking bronco, or lots of them — the 295 works of Western Art from the Haub Family Collection donated to TAM, plus more than $15 to build a new wing to house them.
The new wing designed by Olson Kundig Architects and built by Sellen Construction is fabulous, the art collection not so much so. It is valuable and pertinent to the history of the region (probably more so to the Southwest and the Western plains than to the Pacific Northwest, but let’s not look that bucking bronco in the mouth), and there are some famous works of art by famous artists. But it is mostly stereotypical and offers a romanticized look at cowboys and Indians glorifying America’s imperialistic western expansion.
Typical of the sculpture that greets visitors as they enter the new Haub Family Wing is Charles M. Russell’s “A Bronc Twister,” a bronze statue of a cowboy riding a bucking bronc — the most iconic of all Western images.
Albert Bierstadt’s “Departure of an Indian War Party” is a somber, dark and dignified look at a small group of Indians on horseback depicting “noble savages” in a romanticized and atmospheric landscape.
Many of the artists never even traveled to the West. Rosa Bonheur’s Western scenes were based on a Buffalo Bill’s Wild West show seen in Paris and Henry Merwin Shrady’s bronze buffalo comes from studies made at the Bronx Zoo.
But let it be known that there are also works by Native American artists and by great modern artists such as Georgia O’Keeffe. One of the nicest paintings in the show is O’Keeffe’s “Piñons With Cedar,” a lovely landscape of a ghost-like dead tree with a young green tree behind it framed by a mountain in the distance.
There are also pop art paintings by Bill Schenck, who worked with Andy Warhol and later turned to Western art. His “Snakes in the Grass” lampoons stereotypical Western art. Done in a paint-by-numbers style, it depicts two cowboys on bucking broncos on either side of large cacti.
The new wing and the outdoors sculptures by Julie Speidel by the entrance from the parking lot and Marie Watt on the Pacific Avenue side of the building provide for a much more welcoming entrance to the lobby area. But the new construction emphasizes the new wing and relegates the original galleries to a far-away area down a long hallway that felt pretty empty on the day I went there for the opening press tour. I trust that more art will be placed in that hallway or that something — anything — will be done to draw people to the older north galleries, because it is the art in those galleries that always has been and I hope will continue to be what makes Tacoma Art Museum a regional treasure.
Art of the American West: The Haub Family Collection, Wednesdays–Sundays 10 am–5 pm, Third Thursdays 10 am–8 pm, adults $10, student/military/senior (65+) $8, family $25 (2 adults and up to 4 children under 18). children 5 and under free, Third Thursdays free from 5-8 pm. Members always free, 1701 Pacific Ave., Tacoma, 253.272.4258.

Posted by Alec Clayton at 12:59 PM No comments:

This is a new feature that I intend to post on a periodic basis as time allows . . . no schedule. I will start with my old friend Ricker Winsor.

Ricker has been called a force of nature, which is an apt description. A Renaissance man is another apt description, because there is little that Ricker hasn’t done and he continues to do it all well. He’s been a vagabond, a beatnik, a world traveler. He’s been a hunter and a fly fisherman extraordinaire.  He’s a writer with two published books, Pakuwon City and The Painting of My Life, and he’s a blues musician who plays in coffee shops and other venues. But most of all, he’s a painter.

When I first met Ricker he was head of the art department at Charles Wright Academy in Tacoma, and he was living a kind of back-to-nature existence on Vashon Island. Today he teaches school in Bali. There’s no telling what he might do next.

Ricker’s art has grown out of the abstract expressionist tradition. In his youth he lived in New York and was friends with many of the first generation abstract expressionist painters. The artwork he was doing when I first met him consisted of highly energetic and colorful landscapes and similarly expressive pen and ink drawings of the island landscape, self-portraits and interior scenes of his studio. His mark-making was volatile, his colors — especially the yellows and greens of flora and sunshine — were intense. Both his drawings and paintings reminded me a lot of Vincent van Gogh.

More recently he turned to abstract painting with paintings reminiscent of Hans Hoffman. And more recently still he has continued in the Hoffman-like vein with highly abstracted urban scenes — rectangular forms in heavy impasto that vacillate between pure abstraction and clusters of buildings. These are dense, rich paintings with lushly applied paint. I suspect that as he continues to develop his art he will continue to go back and forth between abstract paintings and impressionist/expressionist landscapes, figures and interior scenes.

This guy is a pure painter.

Posted by Alec Clayton at 12:42 PM No comments:

Posted by Alec Clayton at 8:43 AM No comments: 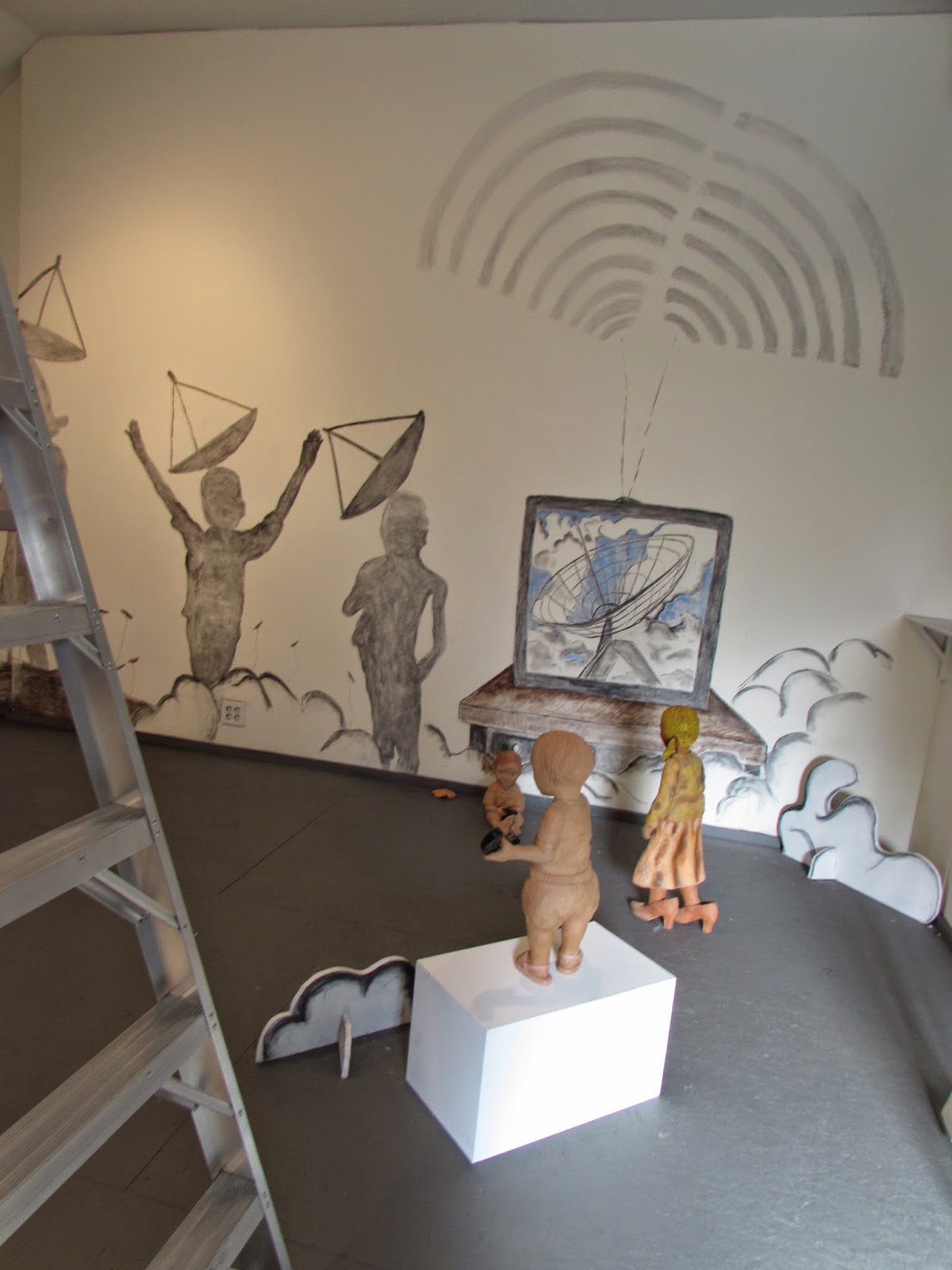 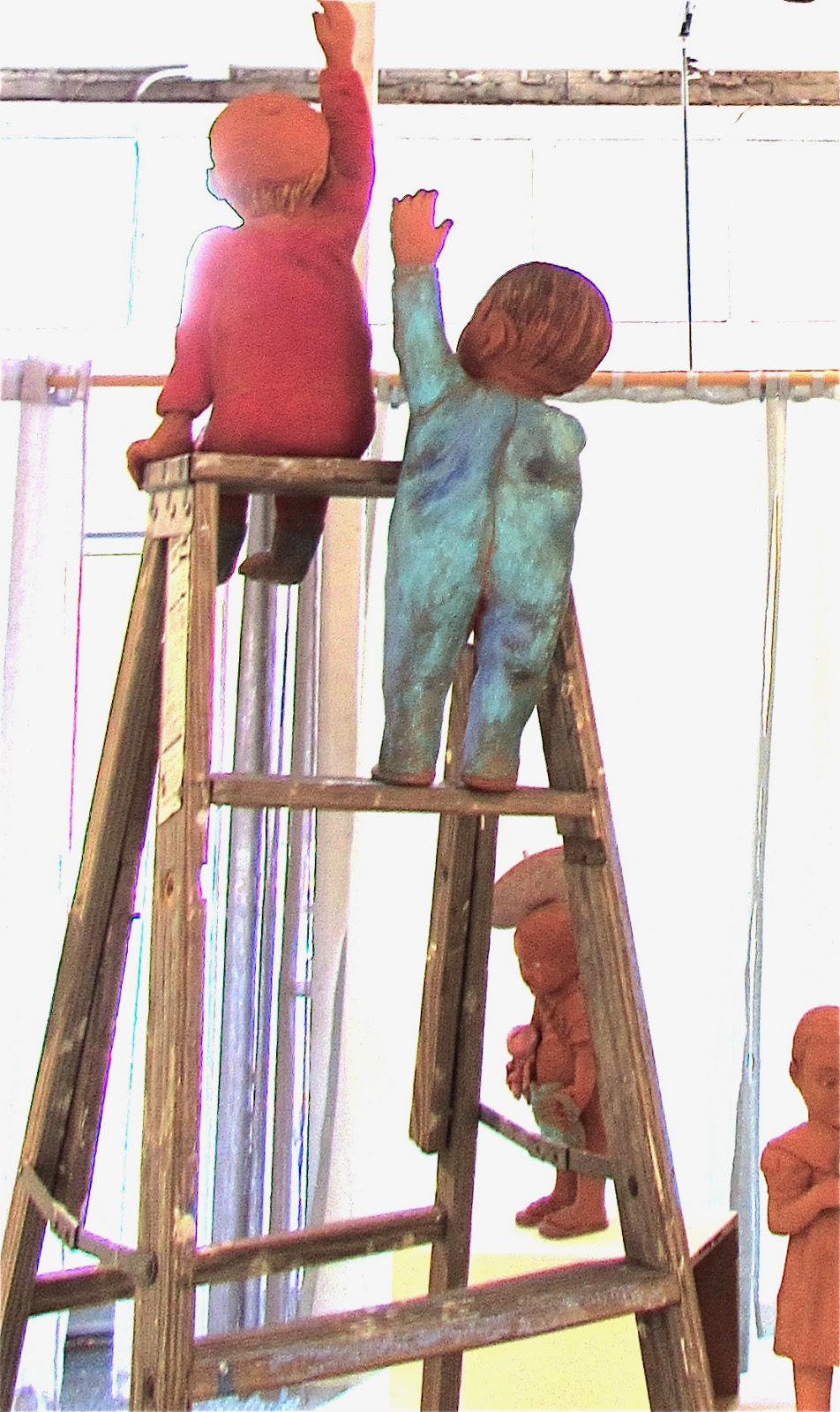 Over the past year Salon Refu has established itself as the edgiest art gallery in Olympia, if not the edgiest south of Seattle. But being in the avant garde is not enough for gallery owner Susan Christian; she also insists that the art in her gallery be skillfully crafted — no carelessly thrown-together art for this gallery.

And that brings us to the current installation by ceramicist Joe Blatt, which is outstanding in almost all aspects but slightly thrown-together in some small parts.
For some time now I’ve been fascinated with Batt’s strangely anthropomorphized animals and child-animal hybrids. Now he offers a complete environment comprised of ceramic children and charcoal drawings. It’s a world of satellites and cellular phones — surreal and futuristic, yet very much the world we live in, a world in which everyone is connected via satellite, in which every hand holds a smart phone and heads, eyes and brains become television monitors.

Batt creates this world by placing ceramic children throughout the gallery, some on sculpture stands, a couple on ladders. Most are unpainted red clay, but there are spots of color here and there, such as the little girl with yellow pigtails and a pink jacket walking in too-large high heel shoes. There are children whose faces become view-screens, children that are cute and loveable and simultaneously horrifying.

Hanging from the ceiling are satellites and satellite dishes, while others hang on the wall, some drawn in charcoal on paper and others drawn directly on the walls. As a final strange touch, little cut-out clouds in charcoal on Foam Core board are scattered about the floor along with broken keyboards made of ceramics.

The marvel of all this is how beautifully and humorously the ceramic sculptures and charcoal drawings contrast and harmonize with one another in content as well as style work. In many ways this may be one of the most completely realized installations I’ve seen in a long time. While studying the show I kept thinking, “ET, call home,” but in this case it was everybody call ET.

This installation is funny, inventive, and a telling commentary on contemporary society (and perhaps a dire warning of a future in which people are indistinguishable from their technological devices).

But now I have to mention the hastily thrown-together aspect that I alluded to in the opening. Although the charcoal drawings on paper are exquisite, those drawn directly on the wall are crude and look unfinished, as if the texture of the wall presented a challenge the artist was not up to or as if he did not give himself enough time to finish them. And the little cloud formations on the floor are silly and uninteresting. Having said that, I now must say this is an installation like no other and you really should see it.

Joe Batt will talk bout his installations Nov. 23 at 6 p.m.

Posted by Alec Clayton at 7:58 AM No comments: