How I faked my way into becoming a theater nerd 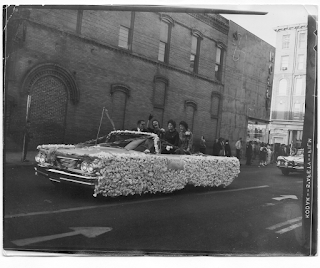 It all started when I was in high school—Hattiesburg High School, Hattiesburg, Mississippi, 1960. Everyone was encouraged to join some kind of school club or activity, 4-H, Junior Kiwanis, Young Republicans, debate team or something. I chose Sock and Buskin, the drama club. We never did any drama. I can’t remember if we ever even talked about it. The reason I picked that club was the faculty advisor was a former Miss Mississippi. Every boy in my class and possibly quite a few of the girls had a gigantic crush on her.
The only thing the club ever did was to cover a convertible with toilet paper flowers and ride in the homecoming parade.
Fast forward ten years. I’m applying for a job teaching art at a school in Clarkton, Missouri, population 1,207 in 2017. Lord knows what it was back then. I got the job. When I met with the principal for the first time, he said, “I see here on your application that you were in the drama club.”
“Yes sir, I was.”
“Well, how would you like to direct the school play? We’ll pay you an extra $200.” (equal to $1,321 today according to what I could find on Google)
Oh yeah, I was all in for that. Never mind that I had never directed a play or even been in a play. Except . . . oh, wait, I played one of the dwarfs in Snow White in the first grade. I almost forgot about that. I not only had no theater experience at the time, I hadn’t even seen more than four or five plays in my life. Naturally, I said, “Yes sir, I’d love to do that.”
The play was some stupid teenage comedy about a bunch of boys dressing up as girls and crashing a girls-only spend-the-night party. Whoever chooses the plays—most likely a committee of parents and teachers—had already ordered scripts.
I held auditions in the gymnasium and cast everybody who showed up. Everyone who didn’t get cast as a named character was put in the ensemble. I told them to hang around on stage and pretend they were talking to other cast members.
The cast was as skeptical as I was, and from the first day of rehearsal they started improvising. Most of the improvised lines were better than what was in the scripts, so I’d say, “Yeah. Let’s keep that.” Other than letting the students rewrite the play, I can’t remember what I did by way of rehearsal. But the play was a hit. The audience laughed hysterically. Afterwards, one of the parents who helped picked the play told me it was the best play ever done at Clarkton High School and said, “I hope you can direct our play every year.”
Well, I didn’t do that because they didn’t hire me back, not as a director and not as an art teacher. That’s a whole different story.
Let’s fast forward another decade. By then, I had seen a little more than four or five plays. Maybe as many as ten total, mostly Off-Broadway and Off-Off-Broadway when I was in New York. And then we moved back home to Mississippi where my nine-year-old son got cast as one of the Lost Boys in a local production of Peter Pan, and he fell in love with theater. From then on, he was a theater kid all the way through high school and college, and I went to see as many of his plays as I could.
In about 2003, I got a part-time temporary job as an assistant features editor at The News Tribune. The job lasted nine months. And at the end of that time my editor asked if I would be willing to write theater reviews. She had no idea how little I knew about theater but trusted I could do it. I managed to fake it while I learned. Since that beginning, I have written something more than a thousand theater reviews, and I feel like I’m beginning to get the hang of it. It’s been a great learning experience, and I’ve made many wonderful friends in the theater community. I so look forward to when live theater can start back.

Posted by Alec Clayton at 10:32 AM No comments: