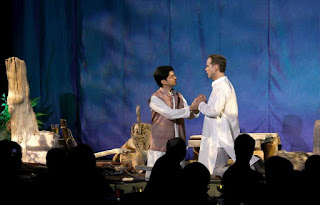 Posted by Alec Clayton at 11:07 AM No comments: 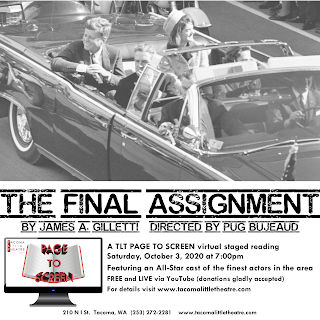 Tacoma Little Theatre's Page to Screen program presents an exciting virtual drama: James A. Gilletti’s, The Final Assignment, directed by pug Bujeaud, stage managed by Nena Curley and featuring some of the Pacific Northwest’s finer actors. It is a one-night-only staged reading, and it is free and online.

This is Gilletti's first off-the-shelf production with TLT. When he isn't busy writing, Gilletti can be found baking, infusing booze, or selling real estate. “But not simultaneously, thank goodness,” he quips. He lives with his wife, two dogs, and tortoise in Lakewood.

The Final Assignment follows a young college graduate on the last day of his internship with a radio station. On a fateful day, Nov. 22, 1963, when a fellow reporter no-shows at the last minute, the intern gets tapped for a mobile news unit post at the corner of Elm and Houston Street just as President Kennedy's motorcade passes the Texas Schoolbook Depository. What follows is a sequence of events that will push this young man's capabilities to their limits, force him to confront his greatest fear, and change his life irreversibly.

Gilletti describes The Final Assignment as an historical drama that tells the story of Sam Patterson, a young man who dreams of working in radio and finally gets his big break just as . . . well, you read the previous paragraph.

Tacoma Little Theatre’s Page to Screen welcomes local playwrights an opportunity to have their scripts performed in a virtual staged reading.  Pieces range in length from scenes, one acts, or full length plays and musicals. To submit your script for consideration, please visit www.tacomalittletheatre.com

The Final Assignment is free, Oct. 3, 2020 at 7 p.m. with donations gladly accepted.  To watch the performance you may join by visiting www.tacomalittletheatre.com, or by following the link to YouTube (https://youtu.be/-O8DYII1CXg)  For questions or more information, call (253) 272-2281.

Posted by Alec Clayton at 2:40 PM No comments:

Along with other live events across the nation, Harlequin Productions’ 2020 Season was halted in March 2020. To complete this year’s season, the theater announces a six-week online radio series, to run September 20 – October 31, 2020. Productions will run for one week each, premiering Sundays at 7:30 pm PST, with a run proceeding Tuesday – Saturday of that week at 7:30 pm PST. Local and regionally known directors will helm each work. All performances are free to the public; space is limited for each performance. To reserve a free ticket or for more information, visit HarlequinProductions.org or HarlequinProductions.org/Radio.

A sensory experience emanates from the pages of local author Jim Lynch’s bestselling novel, which instantly transports us beneath the waters of a marine world teeming with infinite life and exquisite possibility.

Sept 27 – Oct 3: For Peter Pan on Her 70th Birthday directed by Kathryn Dorgan

The refusal to grow up confronts the inevitability of growing old in Pulitzer Prize-nominated playwright Sarah Ruhl’s lyric comedy.

From the Pulitzer-winning playwright behind Angels in America comes a dramatic parable for our time. This early Tony Kushner work follows a group of artists and political activists struggling to preserve themselves in 1930s Berlin as the Weimar Republic surrenders to the seduction of fascism.

Stuck at home in a state of shocked limbo after a horrific school tragedy, Julie and Zander, two twelve-year-olds, try to make sense of what they witnessed, their awkward crushes, and an infinitely more complicated future — but the grown-ups are no help at all. An urgent response to our times by playwright Lindsey Ferrentino.

In a contemporary re-imagining of one of China’s most famous classical dramas, a young widow curses those who executed her for a crime she did not commit. Frances Ya-Chu Cowhig’s new interpretation of the Guan Hanqing original was first produced as part of the “Chinese Translations Project” at the Royal Shakespeare Company. A second production was received in 2018 at the Oregon Shakespeare Festival.

For our last offering in the series, join us for a gripping radio drama in the best Harlequin tradition of chills and thrills, just in time for All Hallow's Eve.

TICKETS: Space is limited for each performance; audiences should reserve their free tickets online at harlequinproductions.org/radio

All casts to be announced

Posted by Alec Clayton at 9:50 AM No comments: