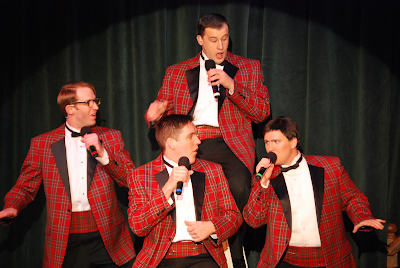 reviewed for The Olympian and The News Tribune


Light hearted and comical holiday entertainment is getting to be a habit. Last week in this column I said it was nice to see a Christmas show that wasn’t sappy (“A Tuna Christmas”). Capital Playhouse in Olympia is offering one also: “Plaid Tidings.”

Written by Stuart Ross and directed by Jeff Kingsbury, this four-person musical review is a sequel to Ross’s popular show “Forever Plaid,” featuring the same whacky doo-wop quartet singing a repertoire of hit tunes from the ’50s, with a bunch of perennial holiday favorites thrown in.

There are excellent solo performances by Jerod Nace and Bruce Haasl and great harmonizing by the quartet of Nace, Haasl, Harrison Fry and Christopher F. Schiel.

As if an hour and a half of harmonizing and nostalgia from an all-male quartet were not enough to keep an audience entertained, there’s the added benefit of inspired comedy. About half the tunes are performed as integral parts of comic skits, with more comic skits between songs, and the remainders are saccharin or heart-breaking love songs -- not so much sappy tunes as parodies of sappy songs. The comic bits are vaudevillian and range from singing backup for Perry Como (just the backup with nearly all of the words omitted) to recreating an entire Ed Sullivan show in something like five minutes complete with plate twirlers, tumblers, opera singers, Topo Gigo and Senior Wences.

The Plaids were just beginning to make it big as a singing group when they were sideswiped by a busload of Catholic school girls. None of the Plaids survived the crash, but they were allowed to come back to earth for one last performance -- and now in the sequel for a second last chance. The Plaids are: Sparky (Fry), Frankie (Haasl), Jinx (Nace) and Smudge (Schiel). Fry and Haasl are crooners with All-American/boy-next-door charm and mellow singing voices in styles reminiscent of Mel Torme or the crooner they all look up to as a role model, Perry Como. Schiel sings bass and moves his long and lanky frame in a loose-limbed gait that is fun to watch. Nace is the nervous and bumbling nerd of the group and gets most of the funny lines. He also displays great range and variety in singing styles and may come close to setting a world record for holding a single note.

Some of the funny bits include Nace soloing on the great Johnny Ray hit “Cry,” and they play rhythmic plopping sounds with plumber’s helpers on “Crazy ’Bout Ya Baby.” The takeoff on the Ed Sullivan show is hilarious. The one skit that falls flat is when they show a clip from a Perry Como Christmas special and sing along with Como. (The preceding bit where they sing backup without the clip from Como is funny, but it dies when they introduce the film.)

There is also a lot of audience participation. At one point a woman from the audience is brought on stage to dance with Nace, and another woman is invited on stage to play bells.

Musical accompaniment is provided by Troy Arnold Fisher on piano and Cary Black on bass.
“Plaid Tidings” is shorter than most plays and runs without an intermission.

Although there were a number of empty seats when I attended, Capital Playhouse is close to selling out all of their performances this season, so be sure to check on tickets in advance.