Silliness takes root in the ‘Beanstalk’ at Centerstage 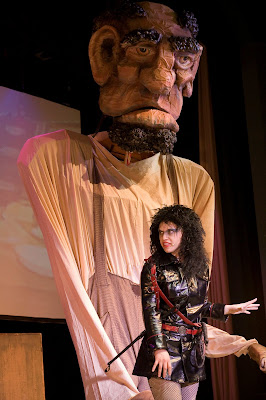 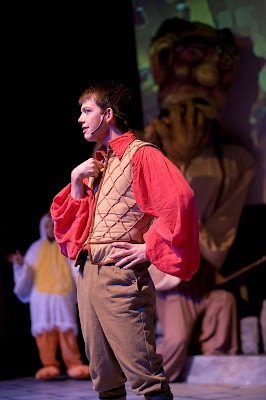 COMEDY: Young and old alike will revel in pantomime


“Jack and the Beanstalk” is the third-consecutive Christmas season panto at Centerstage in Federal Way.

Audiences are beginning to grow accustomed to them.

Still, the English panto, a long-honored holiday tradition in England, is new to most Americans, and audiences seem to enjoy them more when they know what to expect.

So just what is a panto?

Think of it as a children’s fairy tale as performed by Pee Wee Herman and the cast of “Saturday Night Live” or a made-for-children version of “The Rocky Horror Picture Show” complete with audience shout-outs.

Almost everything in a panto follows a set formula. They are comedies based on popular fairy tales that both children and adults can enjoy.

There are stock characters in every panto, including a good fairy who serves as a narrator, a woman played by a man who is ugly as homemade sin but thinks he is beautiful, and an evil, young, male villain who is always played by a woman who, by tradition, wears a very tight and very short skirt.

Stock bits include references to local and topical issues (Capitol Hill in Seattle and the mayor of Fife among the local references in this “Jack”). Audience participation is called for. Boys and girls (and adults, of course) are asked to cheer the good guys and boo the bad guys.

At one point in this production, half a dozen children were brought on stage for a sing-along, and at another point candy was thrown into the audience.

Adults will enjoy the countless groaner puns and sexual innuendos, which are mild enough to not offend and which will go over the heads of most children.

In addition to the all the silliness, there is a lot of rock ’n’ roll music including rocking renditions of “Crazy Little Thing Called Love,” “My Boyfriend’s Back,” “Let the Sunshine In,” “Higher and Higher,” “I’m Gonna Getcha” and more.

I attended a matinee performance, and the house was full with a lot of children who responded loudly and enthusiastically. There are only two more matinees scheduled, Saturday and Sunday, and I recommend those performances if you’re bringing children because at 21/2 hours including intermission evening performances might run too late for children to see in good humor or to stay awake for.

“Jack” stars Rosalie Hilburn as Fairy Sugarsnap, Melanie Moser as the deliciously evil Fleshcreep, and Alicia Mendez as Princess Tamara (running joke about the confusion of Tamara and tomorrow). Roger Curtis is campy as the hideous Dame Trott, and is also the panto’s director. Scott Polovitch-Davis plays the lovable Billy Trott, and David Roby his brother Jack Trott who chops down the beanstalk and kills the giant.

Davis, who has been outstanding in everything I’ve seen him in, was not quite up to his usual level the day I saw it. He was good, but not as snappy with his delivery as in “Aladdin” at Centerstage and “The Producers” at Tacoma Musical Playhouse. Mendez also could have used a little more zip in her performance, but her singing was grand. Bowers was outstanding in both acting and singing, as were Curtis and Moser, easily the funniest two characters in the play. Both of them threw themselves wholeheartedly into their parts.

Deserving special notice was the giant, a puppet created by Vashon Island puppeteer artists The Zambini Brothers. They kept saying the giant was 20 feet tall, and he was easily that, if not taller. Warning: The puppet may be scary for young children. One 3-year-old had to be carried out screaming in terror.