And the walls came tumbling down 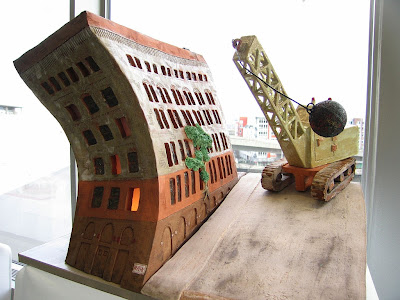 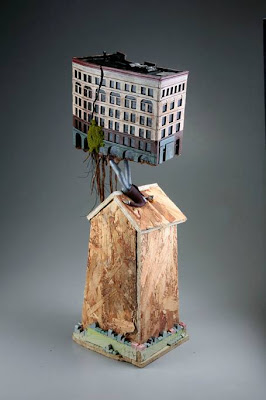 Claudia Riedener and other Tacoma artists decided they weren’t going to take it lying down when the city tore down the historic Luzon building on Pacific Avenue. They could not stop the demolition, but they wanted to make sure we remember and, hopefully, prevent the demolition of other landmarks in the future.

In remembrance, Riedener is curating an art exhibition and sale with half the proceeds to go to Historic Tacoma, a group dedicated to preserving historic architecture and working with the city to ensure owners maintain historic properties.

Specific to the dearly departed Luzon, the 1891 building was designed by Daniel Bernum, “an icon of architect,” according to Michael Sullivan of Artifacts, Inc. Architects were just beginning to experiment with steel as a structural element, Sullivan says, which led to the development of the modern skyscraper.

Daniel Putnam, CEO of PCS Structural Solutions, which was constructing a nearby building more than 100 years later, wrote to Tacoma Public Works director Dick McKinley saying the Luzon building was unsafe, and the walls came tumbling down. Peter Callighan of The News Tribune wrote that Putnam described the 119-year-old building as “an embarrassment” to the business district and “aesthetically unremarkable compared to many other older buildings in Tacoma.”

“I am greatly concerned about the risk the Luzon poses and the aesthetic blight that it casts upon the neighborhood,” Putnam said.

The Luzon memorial show is called "Make No Little Plans." It will be held in a building at 301 Puyallup Ave. temporarily named Logical Diagram Gallery and will have two openings: Thursday, Dec. 17 from 5-9 p.m., and Sunday, Dec. 20 from noon to 5 p.m. Thereafter the show will be open through Jan. 10 by appointment only.

Two of the more enjoyable pieces (based on photographs, not having seen the actual pieces) are Riedener’s and Di Nino’s, both of which are cartoon-like sculptures. Di Nino’s mixed-media sculpture "Burnham and Root, Uprooted" has the Luzon building in what looks like clay suspended above a compressed wood building that looks like an outhouse. Riedener’s ceramic Luzon building bends backward as if cringing away from the wrecking ball, also ceramic, that is swinging toward it. Her piece is called "Mr. Putnam does Tacoma."

Also very interesting is Eric Fisher’s photo of the demolition called "Wrong Way" (a title with a double meaning, which will become evident when you see it). It looks like an old fashioned black and white photograph that has been artificially colorized. Most of the buildings are in gray tones, but the street signs and wrecking crane are in color. It is a powerful image of a moment in time not to be forgotten.