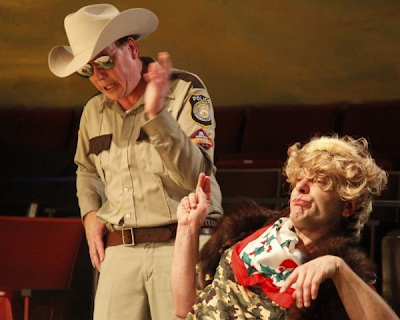 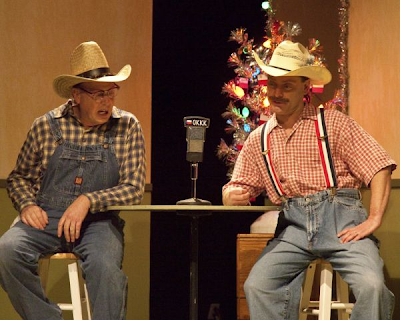 Lakewood Playhouse and Tacoma Little Theatre are collaborating this holiday season to bring South Sound audiences the hilarious “A Tuna Christmas,” and it is anything but sappy.

It’s a mind-blowing skewering of Southern culture and a two-person tour de force of comedy acting.

Written by Jaston Williams, Joe Sears and Ed Howard, “A Tuna Christmas” is part two in a trilogy of plays set in the fictional town of Tuna, Texas. (It’s actually a quartet now, with the originators touring the fourth installment, “Tuna Does Vegas.”)

Williams and Sears have been touring the plays since the first one, “Greater Tuna,” debuted in 1981. They even performed it in the Bush White House (proving that Texans are big enough to laugh at themselves).

Campbell is now the TLT artistic director, and the two have continued to work together by revising their roles in part two in the series, which opened at Lakewood Playhouse and will move to TLT next week.

“Tuna” is political and social satire in the tradition of “Hee Haw” and the “Blue Collar Comedy Tour.” Just about every character in the play is a complete idiot. Even their names are idiotic – Inita Goodwin (pronounced I Need a Good One) and Garland Poteet and Arles Struvie) – and the town is so conservative that the local little theater did an all-white version of “A Raisin in the Sun” and the local radio station’s call letters are OKKK.

Many of the lovable characters from “Greater Tuna” reappear, including radio announcers Thurston Wheelis (Walker) and Struvie (Campbell). Aunt Pearl (Campbell), who poisoned dogs in the first show, shoots at blue jays with a slingshot in this one. Sheriff Givens (Walker) is still incompetent.

New characters Inita (Campbell) and Helen Bedd (Walker) – do I need to point out the pun? – add a bit of spice to the Christmas mix.

There were more dropped lines than usual during the Saturday matinee last week, but that’s certainly forgivable considering that Campbell and Walker play 11 characters each. Besides, they recovered quickly and never missed a beat. Both actors are outstanding.

I’m pretty sure this is the only play in which I’ve ever seen dressers listed in the program, and I’m sure it’s the only one in which they’ve been brought out for a curtain call. They deserved it.