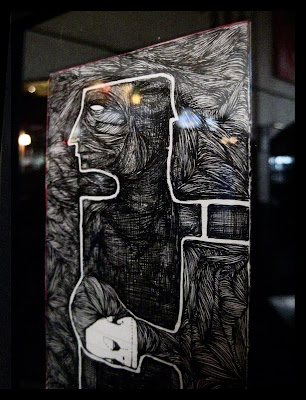 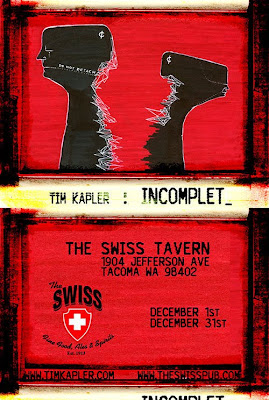 Doodles by Tim Kapler at The Swiss

Published in the Weekly Volcano, Dec. 10, 2009
Pictured: one of Kapler’s works with The Swiss in the reflection, and poster from the show, courtesy of the artist


I had a nice chat with Tim Kapler at The Swiss Thursday afternoon and took a long look at his drawings, which will be on display throughout the month. Kapler is a young man who is pretty much self-taught and just starting out as an artist. He said he doodles a lot and commented that the reason the figures in his drawings are shown only from chest up is that he doesn’t know enough about anatomy to do full figures.

Yes, the works on display have the general look and feel of the kind of graphic novel/sci-fi-inspired art I have often complained is too prevalent among young artists, but there is an intensity and inventiveness to these drawings that have much to be admired.

It is a hastily thrown-together show of 19 small drawings taken from Kapler’s sketchbooks. The show is called Incomplete, with the final E incompletely drawn on the show poster, a clever play on a title that has multiple meanings — that the body of work has not reached any kind of resolution, that his ideas are still in gestation, and even that the individual drawings have holes or missing pieces. Which they do, and which is one of the more interesting aspects of these little drawings.

As a typical example, a drawing called "Artistic Smashing" shows a figure a man with an angular and flat chest and exposed musculature as if his skin has been stripped away. There is a large gap of nothingness between the man’s chin and his eyes. White paper. The top half of his head floating well above his chin. Two other drawings, "Ambidextrous" and "Denis," employ the same kind of open space between body parts. Being aware that Kapler does not have extensive training in art, I assume he has instinctively discovered a very affective visual tool and has just as instinctively arrived at the kind of sophisticated use of space most artists arrive at only after years of study.

There are 19 drawings in the show. All are small pen and ink drawings on paper, most in black and white. A few have large areas of red ink contrasting with the black and white line drawing, and one, called "Return to Sender," is an almost solid black figure seen in profile on a yellow-brown background. The face alternates from white line on black ink, a kind of scratchboard effect, to black line on white. The media is listed as pen and file folder, and the artist confirmed that it was drawn on a manila file folder, which is the source of the yellow-brown color.

In addition to the afore-mentioned sophisticated use of white space, the main impetus to Kapler’s drawings seems to be a contrast and balance of fine line drawings and dense areas of shading.

One of my favorite works is one called "Pierce," which is a masculine figure seen from the back with his head turned to profile and wearing what looks like a woman’s one-piece swim suit shaded almost black with dense crosshatching.

But my most favorite work is the poster for the show, which can be seen at The Swiss and online at www.timkapler.com.