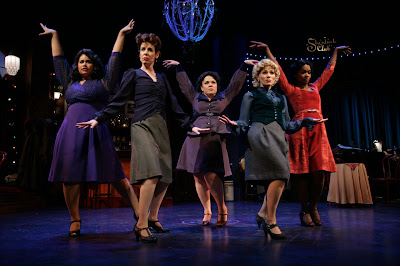 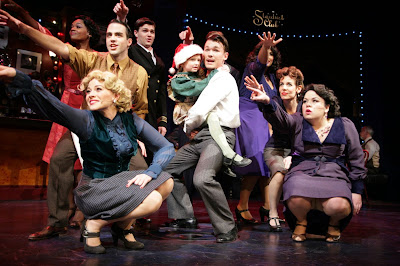 
Harlequin Productions’ “Stardust Homecoming” has everything you could ask for in a musical comedy – except for real excitement.

It has an inventive script, great direction, an outstanding cast including a very cute kid, original arrangements of swing era hit tunes and Christmas songs (arrangements by trumpeter Syd Potter), a beautiful set, musical accompaniment by one of the best swing combos in the Puget Sound area, and wonderful choreography. I could go on and on – lighting, sound, costumes. It’s all good. And yet the whole does not come up to Harlequin’s usual standards.

I’ve come to expect thunderous standing ovations at Harlequin’s dramatic productions and riotous dancing in the aisles at their summer rock and roll shows. By comparison, the final ovation for the 15th original “Stardust” performance was mild. There is no one element or combination of elements to explain the difference; they just did not generate the same excitement.

This original story by the allusive and reclusive Harlowe Reed is a Christmas themed comedy with film noir undertones set in New York’s Stardust Club on Christmas Eve, 1942. A mysterious fishmonger delivers a fish to the club, and soon there-after a government inspector from Atlanta, Ga., shows up in search of the fish, within which is supposedly hidden counterfeit gas rationing cards. (It’s the early years of the war, consumer goods are rationed, and ration cards are traded on the black market.)

There is romance in the air, and mystery and drama are acted out with song and dance.

The ensemble cast is outstanding. Any one of the cast members could easily stand out in a leading role, but the nearest to a leading role is Kevin McManus as inspector Ed Ballantyne, whose name everyone seems to have a hard time remembering or pronouncing (a running joke the writer was smart enough to play out quickly). McManus solos wonderfully on the bluesy “Mood Indigo” and combines some howling soul singing with unique, stiff-legged, dancing (like a puppet drunk on eggnog) on the old Louis Armstrong hit “Zat You Santa Claus.”

Paul Walk as Frank and Kody Bringman as Stuart also do some fine athletic dancing reminiscent of such greats as Gene Kelly and Donald O’Connor on the opening medley, “Hellzapoppin/Birth of the Blues.”

The fourth male singer is Matt Shimkus as Marty Ross, an old-style crooner who sings beautifully on “Stardust.”

The women in the play are Jessica Blinn as Rosalind Norris, Antonia Darlene as Cleopatra Jackson, LaVon Hardison as club owner Loretta Mae, Rachel Permann as Adelina Cavallo, and Emilie Rommel-Shimkus as Nora Lynn – characters many will remember from previous “Stardust” shows. They are all accomplished singers and actors, plus Blinn is an outstanding violinist. I wish there had been more opportunities for each to shine individually, but the men get most of the solos in this production.

Two other actors deserve special notice. They are 7-year-old Emma Haws and band leader Bruce Whitney, who abandons his piano at one point to do a very charming rendition of “Rudolph the Red Nosed Reindeer” with Haws.

The show runs through Jan. 2 with possible extra shows to be announced. The New Years Eve performance was almost sold out at press time. Check for ticket availability on the Harlequin Web site.

When: Thursday-Saturday and Sundays (times vary) through Jan. 2 with possible extra performances to be announced Dec. 29-30 and Jan. 3

Alec, I couldn't reach you through the link on your web page (you might want to check that out), so I'll do it here.

Given that your name just isn't all that common (matter of fact, you might be the ONLY one of your species), and that you're from Mississippi, I'll just bet anything that you're the former editor of Mississippi Arts & Letters. I used to write for you now and again. Now, here we both are--in the Pacific Northwest--you in Washington since 1988, and me in Eugene, Oregon, since 1986. I am so glad you're still alive and kicking.

I don't remember what all I wrote for you except that one piece was an interview with Carroll Case, a writer from McComb. I remember it because you put a photograph I made of him on the cover of that edition.

Very astute of you to figure out that, yes indeed, I was the editor of Mississippi Arts & Letters, and I remember the article on Carroll Case, but I don't remember the name Snowbrush -- obviously a screen name. Thanks for pointing out the problem with the contact page on my website. I'll have to fix that. Meanwhile I am reachable at alec@alecclayton.com.

I would love to see this live one day! What a fun cast it seems.