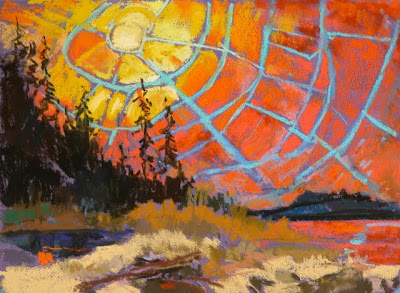 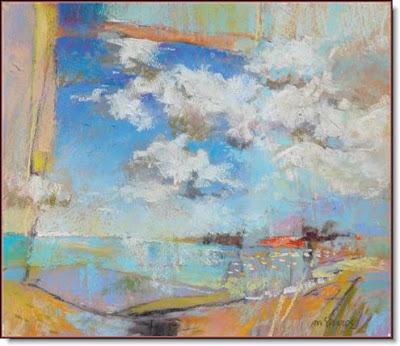 Sunshine and moonlight in pastel

Pastel gets a bum rap. It’s thought of as soft, a media for hobby artists more than for the real deal — associated with lightweight landscapes and figures in a traditional or pseudo-impressionist style. About the only heavyweight artist who ever worked extensively with pastel was Edward Degas.

The pastels by Bill McEnroe and Judith Smith at Childhood’s End Gallery show that pastel paintings can be a little more than sweet and decorative, although the works in this show do still look a lot like late 19th and early 20th century stuff. I see a lot of echoes of Degas, Whistler and Turner in these works.

Both artists are showing works that are edging into new territory for them. McEnroe is known for landscapes and street scenes in a style that comes out of the impressionist tradition. I remember one from a few years back of children romping in the fountain in downtown Olympia that reminded me a lot of Degas’ pictures of horse races. In his newest works he is becoming more abstract and playing more with light and dark. Sun flares and fiery sunsets abound. Smith is known for her emblematic and somewhat dark and foreboding pictures of crows. In this show she has a number of pastels from a new series of underwater scenes with luminescent fish and anemones and seaweed in dark water.

The newer works by both artists are a little too intentionally dramatic. I get the feeling they’re trying too hard. In each case, the older works are more solid, less showy. Naturally, they have each worked a long time with traditional landscapes and street scenes (McEnroe) and crows (Smith), and they have those down pat. It may take them a little time to reach the same level of resolution with the newer works, but I’m glad to see them each trying to push beyond their comfort zones.

Both artists are showing examples of their older works along with the newer pieces. Smith also has a few abstract paintings in addition to the underwater and crow series.

My favorite pieces in the show are by McEnroe. They are: "Organic," a street scene at an outdoor market with bright yellow sunlight and an equally bright tent flap (it reminds me of Degas and of some early Marc Toby); "Tide Walkers," an impressionistic beach scene with a blazing sunset and two tiny red specks that — formless though they are — are clearly people walking at the water’s edge; and finally "San Diego Bay," another beach scene with a inset section of sky and water that looks like a photographic double exposure.

Also showing are some very large raku pots by Dave and Boni Deal, who I am told live without electricity and throw these giant pots on a kick wheel. Amazing.