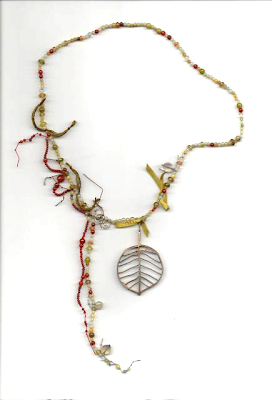 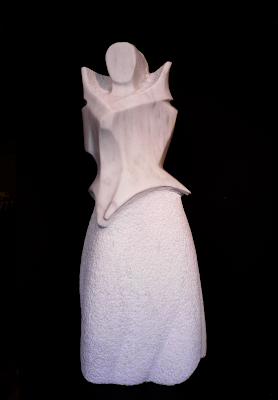 LeeAnn Seaburg Peery and others at Grand Impromptu


LeeAnn Seaburg Peery is a sculptor whose work harkens back to Michelangelo’s slave sculptures — highly polished figures emerging from rough marble — and similar figures by Rodin. She carves abstracted human bodies in marble, alabaster, soapstone and limestone, which she personally chooses from a quarry in Vermont. At their best her sculptures are elegant and sensual; at their worst they are clichéd figures that appeal to sentimentality more than sensuality — like Boucher’s "Marie Louise O’Murphy" compared to Rembrandt’s "Bathsheba at Her Toilet."

Peery is showing a group of white marble sculptures and a couple of soapstone sculptures in the show Rock Paper Scissors at Grand Impromptu Gallery. The white marble pieces make excellent use of contrasts between smooth and highly polished surfaces and roughly textured and rock-like surfaces, between jutting angles and fluid curves. One called Sensual Woman is the best piece in the show because it is the simplest in form and the most abstract. The more she departs from the illusionist while still maintaining the basic feel for the figure, the better her works are; and the more noticeably they refer directly to the figure, the more clichéd.

Also showing as part of Metal Urge are jewelry pieces by Joni Joachims and Micki Lippe. Lippe’s necklaces are rough looking but delicate metal works with beads and feathers and sticks and other objects derived from walks in the woods (metal, not real sticks and feathers). Joachims makes heavy ornate rings and pendants out of silver with semi-precious stones. If I were a person who wore jewelry, I think I’d like to have some of hers.

As usual, a large selection of works from members of the Grand Impromptu co-op are also included in this show. Among the best of these are paintings and constructions by Becky Frehse and digital photographs by Bea Geller.

"In Gathering" by Frehse is a semi-abstract painting in oil and mixed media of a river with rocks below and sky above. Words and parts of words in raised letters float in the sky and seemed to be embedded into the rough surface as if they are carved letters pushing out of mud. Slung across parts of the canvas is a fisherman’s net tossed over water. I particularly like that this collage element stands out without being obtrusive or having a tacked-on look.

The best of Geller’s photographs are "The Shroud" and "Factory Pine." "The Shroud" is a post-apocalyptic vision of a city with a dense growth of trees, brush and moss taking over buildings. Everything is a dull gray with subtle hints of color.

"Factory Pine," another post-apocalyptic vision, pictures the crumbling ruins of a row of factory buildings on a river bank. Large graffiti tagging in bright colors fill the walls of the buildings. Everything except the writing is colorless. In the foreground, river water washing onto shore has the slick look of highly polished metal or rock.

I received the following announcement after this article went to press.

LeeAnn Seaburg Perry’s grand dame marble sculpture that greets you as you enter the Grand Impromptu Gallery for the exhibit Rock Paper Scissors, now has an identity. Perry selected the name “Nightingale” from a story written about the sculpture by Tacoma poet Jean Musser. Musser received naming honors and was awarded a thumb size Perry sculpture as a prize. Here is the sculpture’s story as told by Jean Musser:

“Her name is Catherine and she stands on noble ground, fathered as she was by Lorenzo de’ Medici, patron of the arts whose tomb was designed my Michelangelo. Sixteenth century Florence was the cup that held her in her early years. She felt the soft winds from the Arno and listened for the nightingale. She grew strong and adventurous, stately and proud. When the King of France first saw her, he threw roses at her feet. Later he made her his queen. She wore a ruff and crown. Yet sometimes she longed for the sounds and beauty of Florence and the sight of the white marble mines high on the hills like the first snow of winter.”

During the first two weeks of the exhibit, gallery goers were invited to submit a name for the piece and write a story or poem about it. Entries were reviewed and the winning title selected by Perry and artist Deborah Greenwood.
[Grand Impromptu Gallery, Thursday 4-8 p.m., Friday-Saturday noon to 8 p.m., Sunday, 2-6 p.m., through July 11, 608 South Fawcett, Tacoma, 253.572.9232, http://grandimpromptugallery.com/]
Posted by Alec Clayton at 7:39 AM