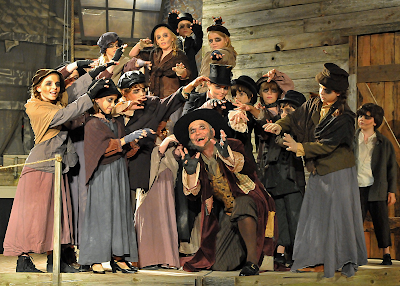 All Saints Theatrical Repertoire Association’s dinner theater performance of “Oliver!” is a gargantuan production with a cast of 35, a crew of 200 volunteer carpenters, painters, sound and light technicians, costumers and other crew members; a huge set, elaborate costumes, a full orchestra, a delicious catered dinner, outstanding choreography, all pulled together by co-directors Mario Penalver and Jake Veitenheimer.

The show is truly amazing, but opening night there were too many technical problems to ignore. There were sound problems (feedback and microphones cutting out), long and noisy scene changes, and a spotlight that had difficulty following actors. Such problems would be unforgivable in a large professional theater, but in an amateur production the overall spectacle is so awe inspiring that such glitches become insignificant.

“Oliver!” presents particular problems because it presents dark and tragic situations in a format that is usually lighthearted and joyful. As Penalver and Veitenheimer point out in program notes, other musicals have successfully overcome such problems, pointing out “Les Misérables” as a prime example. And, intentionally or not, there were many reflections of “Les Misérables” in this show, as well as stylistic borrowings from “Sweeny Todd” and “Fiddler on the Roof” and “My Fair Lady.”

This “monstrous” play, they wrote, “delivers a twisted struggle between good and evil that is not easily presentable.” As a guide to how to present such a struggle they turned to film director Tim Burton for inspiration, and people who have seen Burton’s work will quickly recognize a similar dark comic style.

The set by Nancy Morris features a London street center stage with an amazingly atmospheric painted backdrop that reminded me of El Greco’s “View of Toledo” with a tavern and dirty digs of Fagin and the orphan thieves to the left, and the swank home of the Brownlows to the right, topped by London Bridge 18 feet overhead.

From the youths in the chorus to the major characters, the actors are generally outstanding. Even insignificant little gestures by kids lost in the chorus are done with style and expression. Most outstanding among the lead actors are Maggie Barry as Oliver, Don Lotz as Fagin, Tiffany Stephens as Nancy and Emily Randolph as The Artful Dodger. Two of these are young girls playing boy parts.

Barry is eight years old and she acts with body control of an older actor and sings beautifully with a voice that is clear as a bell. Early on when Oliver beats up the much larger Noah (Henry LeMaster), it looks like he’s really hurting him. Her part in the song “Who Will Buy?” is breathtaking – actually the cast and ensemble’s performance of that song is.

Randolph, 11, looks older and is easily believable as a rough young man.
Stephens owns the stage when she performs “It’s a Fine Life” and “As Long As He Needs Me.” She has a powerful voice and a commanding swagger.

Speaking of owning the stage, whenever Fagin takes center stage the theater lights up with electricity. More than anyone else on stage he epitomizes the Tim Burton style. He is deliciously evil, and his performance of “Reviewing the Situation” is one of many musical highlights in this play.

Other performances that deserve special note are those of Woody McCallister as Mr. Bumble and Amy Ledvina as Widow Corney. I don’t know if the homage was intentional or not, but I could not help but think of them as the Thénardiers in “Les Misérables.”

Be prepared for a full night, right at four hours counting the dinner.