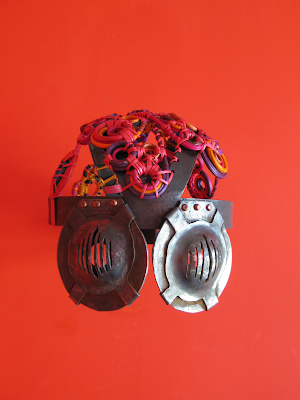 The Art of the Chastity Belt


If the title to the latest show at mineral doesn’t attract some attention, I don’t know what will. Not to mention the double whammy of pairing it with a related show next door at Gallery 301. The shows are "Entrance Denied: the Art of the Chastity Belt" at mineral and "The Seven Deadly Sins" at Gallery 301.

“In the modern imagination, the chastity belt was a mechanical device employed by knights to guarantee women's virtue while they were away on the battlefield, writes gallery owner Lisa Kinoshita, continuing to say, “the chastity belt probably never knew as widespread use as commonly imagined.”

Works in the show include "Playscale," five chastity belts designed for Barbie by Naomi Landig and Dorothy Cheng; Pathological Purity, a chain mail-inspired piece by Julia Lowther handmade from more than 2,400 sterling silver and niobium rings; and "The Guardian," an elegant take on bondage wear in forged copper and oiled leather by Lauren Osmolski; and a deck of playing cards advertising Las Vegas call girls with the cards altered by Marc Dombrosky; and in the "Sins" show watercolors by Nicholas Nyland that quote letters from South Carolina Governor Mark Sanford to his Argentinian mistress.

A written statement by Landig and Cheng explains of the Barbie piece: “We hope to question how the chastity belt and Barbie have been manipulated by various groups within society to represent sometimes very different ideas. Rather than seeking to use them as objects for feminist or antifeminist critique, however, we seek to explore how their respective fantasies become playfully illuminated, enhanced, and disjointed by their copresence (sic). Here, the chastity belt becomes merely another accessory of the prolifically adorned Barbie, highlighting the absurdity of a sexless but sexualized toy wearing a garment which was originally imagined to prevent the act of sex, but which now is sometimes used in contemporary practice to enhance the experience of it.”

Such ideas abound in this show. With a few exceptions, however, the ideas are more intriguing than the art is aesthetic. There are, for instance, four mannequin forms hanging on the walls, each wearing artist-made chastity belts by different artists. The belts are interesting and well-crafted body adornments, but the mannequins are just forms to display the objects on, not integral parts of the art. One other mannequin is more an integrated work of art. It’s a bright acid green sculptural form by Galen McCarty Turner with a coil of green neon and a bull’s head placed over the crotch. Bright green for “go,” but placed so as to halt entry and guarded by a big, bad bull.

One of the most aesthetically pleasing pieces is hanging milestone, metal and steel sculpture by Carla Grahn with floral and sunburst shapes in various shades of dusty pink and beige. It takes a stretch of the imagination to see how this represents a chastity belt, which I chalk up as a positive because most of the art in this show is too literal.

Another piece that’s not so literal and one of the most interesting in the show is Lynn De Nino’s "Natural Selection Protection (She Hears Him Coming, She RUNS." As usual, De Nino combines bizarre humor and invention. This piece made out of knitted wire, steel, leather, moss, patchouli oil (in a vial), crackers and found materials including bells to, I guess, let “her” know when “he’s” coming (double entendre intentional?). The wire is shaped like a giant phallus. It looks rough and dirty and ancient.

"The Seven Deadly Sins" next door is more visually oriented and less literal. Among the better works in this show are "Plagued with Pride," acrylic ink and pencil on paper by Cathy Sarkowsky, featuring a line drawing of an evil, or prideful, clown over bands of sweet, water pastel colors and "Avarice," a three-part mixed-media assemblage by Becky Frehse. This show has a shorter run, ending
Aug. 18.