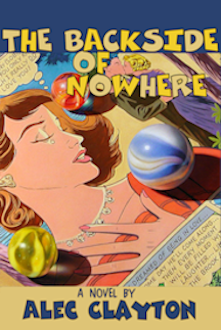 Here's a bit of a teaser, a little scene from The Backside of Nowhere. It takes place near the end of the book. A hurricane has hit the coast. The Lawrence house has been swept off its foundation and washed down the bayou with everybody inside. David and Randy dove underwater in search of Pop and Melissa ...

Once he’s halfway up the stairs and able to stick his head out of water. David says, “Take her from here.” He’s gulping air so desperately he can barely speak, but Randy gets the message. He drags Melissa upstairs and lays her out on the floor and begins blowing in her mouth and pushing on her chest. David gulps as much air as he can and dives underwater again.

In the upstairs hallway water gushes out of Melissa’s mouth and she coughs violently and vomits up bits of egg and sausage. Randy smells the whiskey she drank. He wipes her mouth with the wet tail of his shirt.

In the murk below, David swims froglike through the house. Not only can he barely see, not only does nothing look familiar, but he feels disoriented to the point that he’s not sure which direction is which. He tries to visualize: come downstairs, turn left through the archway into the kitchen or to the right into the living room area. If the house is turned around, he wonders, would that mean left is right and right is left? No, of course not, he decides. But what difference would it make anyway? Pop was in the living room when the surge hit, but he could have been washed into any other room or even out of the house. He could be halfway down to Bilbo Bayou. Or would it be up to Bilbo Bayou now? Again irrelevant, he tells himself, his stupid mind going bonkers, maybe from lack of oxygen. If David could see outside and if there were anything familiar out there with which to orient himself, which there may or may not be following a hurricane, he would know that the house was tipped partially to one side and is jammed with its south wall against the shore of Walker Cove half a mile south of where it stood before the storm hit. If he could somehow get out on the roof or onto the deck, he could jump to the ground. But no he couldn’t. Because the ground would be ten feet underwater, just as the first floor of the house is. But if he could, what would he do then? Go for help? Where? The rest of Freedom is surely long since evacuated, so where would he look for help? It drives him crazy that he can’t think clearly. He begins to panic. The simplest thought processes seem impossible. Nothing makes sense. He tells himself to calm down. Think. All of this time while he is trying to sort out his thoughts he is underwater, moving aimlessly, not so much swimming as propelling himself by pushing and pulling in and around chairs and tables and careening off walls. Boiled shrimp and hamburger patties swim with the fishes. He surfaces as best he can, gasping air in the few inches by the ceiling, and then dives again. He sees something huge and black in the muddy water. It’s his mother’s grand piano. It’s turned sideways against a wall. The top of the piano has broken loose and is floating against the ceiling, but the mass of it is jammed underwater. He sees Pop’s leg protruding from beneath the piano. He knows he can’t lift it. Even if he were on dry land he couldn’t get a firm footing to lift it. But if he could just break it loose from whatever was jamming it, wouldn’t it simply float up? Does he have the strength to work it loose? Everyone knows that people are capable of inhuman feats of strength at such times. Who knows? Why not at least try? He grabs an edge of the piano and lifts, but of course it does not budge. Then he sees another body coming toward him. It’s Randy. He’s already helped save Melissa, and now he’s diving in to help save Pop. He swims up alongside David and they nod heads in recognition that together they can do it. Friends or enemies, they nevertheless spent their youth together in these waters swimming long distances, holding their breath ungodly lengths of time and building the kind of strength and determination that just might help them conquer this challenge. Never mind that Randy has put on thirty pounds of pure fat and his once powerful muscles have gone to flab. They push together but they cannot move the piano. And then they see something that scares them both half to death. A giant fish has somehow gotten into the house, probably swimming right through the broken back door. It looks like a small whale or a dolphin. Oh God! Could it be a shark? It’s coming right at them ...

More info on The Backside of Nowhere here.

Available on amazon.com or at Orca Books in Olympia
Posted by Alec Clayton at 4:29 PM

I recently came across your blog and have been reading along. I thought I would leave my first comment. I don't know what to say except that I have enjoyed reading. Nice blog. I will keep visiting this blog very often.