Gender roles out the window in this Romeo and Juliet interpretation 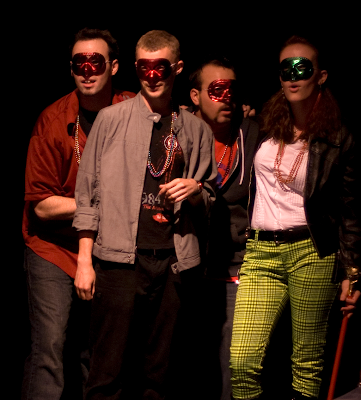 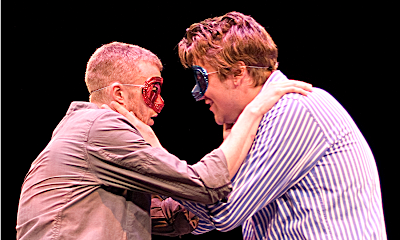 Over the years theaters have tried many twists on the staging and interpretation of Shakespeare in order to keep the bard’s work fresh. Theater Artists Olympia, a local company that searches for new ways to challenge audiences, is doing “Romeo and Juliet” with contemporary settings and costumes (nothing new there) plus significant changes in gender roles. Romeo and Juliet are both men. Mercutio and Tybalt are women. Paris, in this version, is Lady Paris. And one actress, Katy Shockman, plays a variety of men’s roles.

Despite the gender switches and the obvious fact of the star-crossed lovers being two men who refer to one another as husband, it is not really a gay play. Rather, gender becomes irrelevant. People love and hate other people in this play regardless of their gender.

It takes a little getting use to. In the early scenes I kept listening for pronouns in an attempt to figure out whether James Holmes-Pohle was a man playing a woman’s part (traditional in Shakespeare’s time) or a man named Juliet who was, nevertheless, still a man – and whether Erin Maggie Stroyan, a woman, was playing Mercutio as a man or a woman.

Trying to sort out genders was distracting through much of the first act, but after that it became a non-issue.

Director Chris Cantrell said: “By changing gender roles, my hope has been to change context to examine the characters and relationships in a new way. A balcony scene between two fawning young people is stereotyped because of the traditional presentation of this show. When the two young people are men, the intensity is renewed. You are given the opportunity to question and examine the motivations you may have originally taken for granted.”

These contemporary Montagues and Capulets fight with guns instead of knives and swords, which works well in the contemporary setting until the final scene, where I missed Juliet’s famous line, “O happy dagger, This is thy sheath.”

Holmes-Pohle is wonderfully expressive as Juliet. Unfortunately, he does not enunciate as well as I would like. In many parts of the play it is hard to hear what he is saying, but his body language speaks loud and clear.

Thomas Neely plays Romeo as an intense young man whose mercurial passions are more believable than what we are used to seeing in this role. Neely is small and wiry, much smaller than Juliet, which lends a touch of realism that is often missing in this highly romantic tragedy. Their passionate love is truly believable.

The juiciest role in this play – the role many actors may prefer to the leading roles – is that of Mercutio. Stroyan plays Mercutio with style, energy and saucy sexuality. Her costume is wonderful: tight green jeans and an ever-present walking stick, which she uses as a weapon and a comedic phallic symbol, much the way Malcolm McDowell used his cane in “A Clockwork Orange.”

Also outstanding are Lauren O’Neill as Nurse Angelica and Tim Samland who plays Lord Capulet as a cigar-smoking, gun-toting mafia boss. With his slicked-back hair and trim beard and the huge pistol in his shoulder holster, his physical presence on stage demands attention.

The play is presented in the round with a minimalist set. The gunshots were shocking even after being warned because they were quite loud. The fight scenes are stylized rather than realistic and are carefully choreographed and almost frightening due to the closeness of the audience. This is a very physical play, and the women fight with athleticism matching that of the men, further challenging the audience’s possible gender assumptions.

It is a long play at three hours, with a short intermission at the two-hour mark.
Posted by Alec Clayton at 8:39 AM