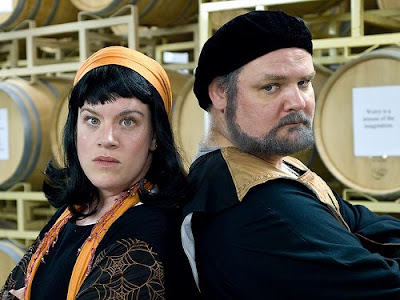 Local playwright T.M. Sell has once again penned an entertaining show for Breeders Theater in Burien. “The Last Magician” is the third of Sell’s plays I’ve seen. Each has been different – “Crazy Naked” a political farce, “Prairie Heart” a pioneer love story, and now this one a comedy about magicians, witches and demons – and yet subsumed in each has been a morality tale with topical humor and pop culture references.

In “The Last Magician” a demon (Nathan Hicks) kidnaps a beautiful young princess (Adrienne Grieco) – or, more accurately, kidnaps her soul and holds it ransom until the king agrees to send the magician Sylvanus, aka “Silly” (J Howard Boyd) to negotiate with the demons. And why Sylvanus, the most incompetent magician in the whole kingdom? Because he is the only person in the world who can empathize with the demons. What Sylvanus understands about the demons that no one else does is that they only look evil and frightening to “real people” and that, in fact, “real people” look evil and frightening to them.

Boyd plays Sylvanus as a loveable doofus who is very sweet and sincere.

Hicks is wonderful as the lead demon. Much taller than anyone else in the cast and wearing ripped punk clothing, long black hair in Rastafarian braids, with black lips and green teeth and tongue, his stage presence is imposing. He wears a little creature on his shoulder that he talks to – changing his voice to speak as the creature and speaking with weird, jerky pauses. And he has a terrific demonic laugh.

The lesser demons, played by Brenan Grant and Laura Smith, are also fun to watch as they prance about in punk clothes and spiked hair, cackling and shouting and going through all kinds of outlandish physical gyrations. Both Grant and Smith play multiple roles, but it is as the demons that they stand out.

Also outstanding are Kelly Johnson as Allendra the feminist witch, and Eric Hartley as Sleath, another magician who is arrogant, powerful, selfish and wealthy.

Grieco is marvelous as the willful little princess. Her range of facial expressions from anger to pouting to flirtatious is captivating. Grieco acts with her whole body. When the demon steals her soul, she goes limp so completely that it’s as if she’s not there; she’s left her body behind like a discarded rag doll.

On the downside, Michael Brunk brings nothing of note to the role of the king. There’s so little expression on his part that it seemed on opening night as if he were just not feeling very well. And Doug Knoop, a fine actor, had very little chance to shine as Crowley, another magician who was not fleshed out enough.

Interspersed throughout are songs with music by Nancy Warren, lyrics by Sell and choreography by Teresa Widner, who also directed. The songs and lyrics are clever, but with the exception of one rousing number by the demon chorus, the cast seemed to be listlessly going through the motions, and Widner’s choreography didn’t match the excellence of her directing.

Finally, there was an unnamed stagehand dressed as a court jester who was absolutely charming. She brought a magical touch to moving a stool.

Overall it’s a very entertaining show, plus wine samples are included in the cost of your ticket because the venue is inside the E.B. Foote Winery down under a strip mall in Burien.

Breeders Theater does not accept credit cards. You can reserve tickets with a credit card, but you will need to pay by cash or check at the door.

Tickets are $15! for the following performances:

THURSDAY, July 23rd "Thrifty Thursday "
If you have already purchased tickets at the original $20 price, please see Nancy at the box office when you come to the show. We are happy to refund to balance.

All other shows remain $20 and tickets are available for all remaining performances.
Posted by Alec Clayton at 12:39 PM