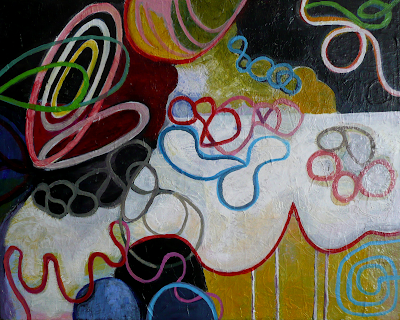 Ribbons of color at Pierce College

The gallery at Pierce College in Steilacoom is nothing more than a wide place in the hall. But that wide space is filled with a dozen or so very nice paintings by CJ Swanson.

Swanson’s abstract paintings are swirls and ribbons of colorful shapes that meander through shallow spaces on the surface of her canvases. Space is an important consideration in her paintings. Perspective or illusionist space is almost nonexistent, but when it is employed it is used intentionally and effectively. She uses all-over compositions, meaning the forms are evenly distributed across the surface with no central focal point. In some of the paintings this translates as a single shape in the center that fills most of the canvas with a relatively even amount of space all around, such as in a group of three very small paintings called "Red Outline," "Yellow Outline" and "Turquoise Outline." These are emblematic shapes painted in flat colors with no variations in modeling, blending, etc., and no overlapping of forms. In others, ribbons and circles and lozenge shapes wind in and out passing over one another in some places and under in others. Still others have flat shapes floating over more atmospheric backgrounds.

Her best paintings are the ones that are kept fairly simple, such as the three little ones mentioned above and "Unwound," which has circular forms floating over large areas of black, white and green. The white areas in "Unwound" are particularly interesting because they are slightly transparent and have a wet look. Like many of her paintings, this one is heavily textured to look like it has been painted over crinkled paper — a very nice effect. (Note: The photograph of this painting I was sent identified it as acrylic and collage, which I could not tell from looking at the painting, so perhaps it is literally painted over crinkled paper.)Finally, I really like the subtle color modulations on the gray and pink circles to the right in the white field. On the other hand, the heavily stacked oval shapes on the top left are too heavy and busy looking.

The least effective are the more complicated compositions that are densely packed with way too much stuff going on, such as "Non-Sequitor," which has a profusion of bottle-shaped forms underneath a web of linear forms. These shapes fight rather than complement each other.

Overall this is an excellent little show.