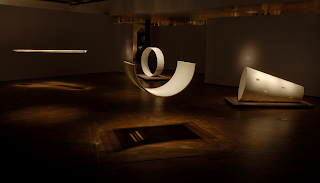 
Daniel Clayman’s minimalist abstract sculptures have been compared to the works of Martin Puryear and Tony Cragg. To me his work looks a lot like a sculpture by Donald Judd, especially in its clarity and what I can only call its “is-ness,” a kind of undeniable presence. Plus it has a kind of lush, sensual quality none of the aforementioned artists have.

Puryear, Cragg and Judd are some awfully big artists to be compared to. Clayman is also compared to (or, more precisely, contrasted with) Dale Chihuly. Both the catalog for Clayman’s exhibition White Light, at the Museum of Glass, and a wall statement in the exhibition pointedly contrast his work to Chihuly, calling Chihuly’s work “over the top.” Coincidentally, Chihuly’s The Laguna Murano Chandelier is in an adjacent gallery at MOG for easy comparison. It is not only over the top; it is outlandish and ugly.

Janet Koplos, senior editor at Art in America, writes in the show catalog: “The presence of (Clayman’s) work — in the artistic sense of a special aura or immediacy — results in part from its large scale, which is far beyond the normal proportions of object-oriented contemporary glass.”

There are many other aspects to Clayman’s sculptures that contribute to that strong presence. First, there is the color, or lack thereof. Everything is white, milky, cloudy, translucent-to-opaque. Then there is the simplicity of form and the use of light and shadow. His works look like monoliths in space. A couple of them are suspended from the ceiling. One tilts menacingly forward, and another is like a beam of light receding in deep perspective. If Koplos attributes the strength of these works to scale, I would counter that they need to be much, much larger to truly create the massive presence they hint at. But I understand that technically working in a much larger scale in glass might not be possible.

There are only seven works in this show. Six of them are outstanding. The only one that isn’t outstanding, in my opinion, is a piece called Pierced Volume, which is a cone-shaped cylinder with square holes cut in the sides. The purpose of the holes seems to be for light to penetrate as it does beautifully in slits in another piece, Aperture, which is a suspended half circle. In the former, the openings detract from the form; whereas in the latter, light beaming through the single slit onto the cast shadow on the floor is stunning and obviously intentional.

My favorite piece by far is Suspended Channel, which is just what the name implies — a 10-foot long channel or trough suspended from the ceiling. Verbal description cannot do this piece justice. It is otherworldly and pure.

Another favorite is Leaning Plane, which is a tall rectangular slab of glass blocks (like glass bricks but flatter) that stands upright and leans slightly forward. The feeling of danger from the forward tilt is dizzying, and the light bouncing off the many nuanced shades of translucent white is quite beautiful. I do have two small quibbles about this one: first, it does not look good from behind and should probably have been displayed for viewing from one side only; and second, I wish the artist had been able to find something other than a cable from the wall to keep it upright.

In addition to the Clayman exhibition, MOG is still showing the long-running exhibitions Contrasts: A Glass Primer (last day Sunday, Oct. 12) and Dante Marioni: Form/Color/Pattern (through March 8, 2009), both of which are definitely worth seeing again.