Tacoma theater's ‘South Pacific’ relies too much on songs 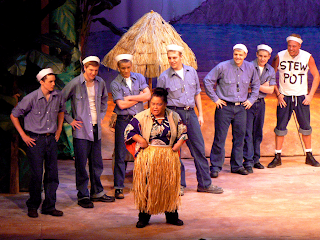 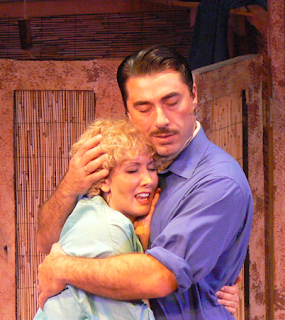 Surely I’m not the only person in America who doesn’t like “South Pacific.”

It is one of America’s favorite musicals and has been for more than half a century. The revival currently playing on Broadway won an amazing seven Tony awards this year, including Best Revival of a Musical. The original Broadway production in 1950 won a Pulitzer Prize, as did the James Michener book, “Tales of the South Pacific,” upon which it was based.

Locally, the Tacoma Musical Playhouse performance of “South Pacific” drew a standing ovation from a sold-out house at the Sunday matinee I attended.

Like many in the audience, I was swept away by both Rafe Wadleigh’s rendition of “Some Enchanted Evening” and Matt Posner’s wistful “Younger Than Springtime.” And yet I did not like the play overall.

The music by Richard Rodgers, with lyrics by Oscar Hammerstein II, is good. But the book by Hammerstein and Joshua Logan is not worthy of all the awards and accolades the play has received.

The story is simplistic and not very inventive. Even the laudable theme of coming to terms with bigotry, which was probably pretty forward-looking in 1950 and is still relevant today, falls a little flat in dramatic terms. The lovers fall in love too easily – at first sight, of course. Also, the death of Cable is an unnecessary plot point that too easily avoids overcoming the bigotry the story is supposedly written to expose. And the exposition, especially in Act 2, is, frankly, just plain boring.

In particular, the way the Polynesian girl, Liat (April Villanueva), is written dates the play. She is used as an object lesson about bigotry but is painted by Hammerstein and Logan as a stereotypical exotic beauty. While Villanueva moves gracefully, Liat is little more than a porcelain doll with no character or personality and hardly anything to say. She is simply the object of Lt. Cable’s affection.

The set by scenic artist Dori Conklin is nicely done. I especially like the use of trees on the wings and the projected images of palm fronds. John Chenault’s lighting is excellent, as is the music by musical director Jeffrey Stvrtecky and his orchestra.

Some of the songs are indisputably great. “Some Enchanted Evening” and “Younger Than Springtime” are among the most beautiful in American musical theater history. And there are few songs as haunting as “Bali Ha’i.” The big production number of “Nothing Like a Dame” is thoroughly enjoyable. On the other hand, I thought TMP did not come up to its usual production standards on “I’m Gonna Wash That Man Right Out of My Hair” and the song and dance number at the Thanksgiving performance. (Granted, the Thanksgiving number was supposed to be an amateur production put on by not-necessarily talented soldiers, but it just looked amateurish – and not in a satirical way.)

Everything else was done very well. The lead characters were all excellent, especially the two leading men, Wadleigh as Emile de Becque and Posner as Lt. Joe Cable. Both are handsome leading men with strong singing voices. Wadleigh also does a very good job of affecting a French accent.

Other characters that add some delightful comic relief are John Miller as the conniving sailor, Billis; Gregory Conn as Stewpot; and David Robertson as The Professor.

In an entry I wrote about a year ago, I examined the plot lines of many of our beloved musicals and the things celebrated -- seduction in "Music Man," ("He's got a girl in every town and he's taken it away from most of them."), and my particular favorite, "Grease," whose message is that in order to be happy you have to turn a nice girl into a slut! To say nothing of cannibalism in Sweeny Todd, prostitution in Sweet Charity, murder and betrayal in Lion King, etc. No squeaky clean shows anywhere!

You're absolutely right, Bev. And you know, even though I enjoyed songs such as "Nothing Like a Dame" and "Younger Than Springtime," the former is sexist and the latter is about seducing an underage girl.

Speaking of no squeaky clean shows, the next two plays I'm reviewing are "Antony & Cleopatra" and "The Threepenny Opera." These make shows like "South Pacific" seem like nursery rhymes.

Hi Alec...glad you liked my work, hope to do more in the Pacific Northwest.

What a relief it is to get a complimentary comment. I was deluged with complaints about this review. Ah, but you were rascally charming as "Bloody Mary."