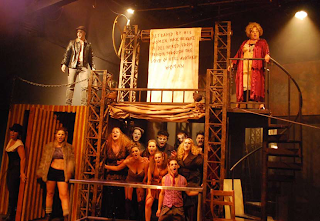 The key to Capital Playhouse’s production of the Bertolt Brecht and Kurt Weill classic “The Threepenny Opera” can be found in this statement from director Jeff Kingsbury: “An interesting thing about ‘Threepenny’ is that there are no guides to the ‘right way.’ Not being produced often, there are decidedly few reference materials to look to.”

In other words, the director had more freedom to interpret the staging, presentation and tone of the play than directors are normally allowed. And Kingsbury has taken full advantage of this freedom to be inventive, daring and oh-so theatrical. The staging of this production – from the sets, lighting, costumes and makeup to the highly stylized and choreographed movement of the actors on stage – is dramatic, tense and dark, and all tinged with satirical and biting humor.

The set by Bruce Haasl is dark and bleak. Ostensibly a poor section of London in the Victorian era, this set with its rough balcony and spiral staircase and ragged curtains – and the big wheels that crank curtains of text and the bars of a jail cell – could be any place or any time, and it sets the menacing tone of the play. In something that has become a Capital Playhouse hallmark, movable props and set pieces serve multiple purposes and seamlessly incorporate set changes into the flow of the action.

Adding to this look are the rough-hewn and outlandish costumes designed by Tom C. Hudson and horror-show makeup. For example: Russ Holm as the beggar chief Jonathan Jeremiah Peachum, is shirtless with big suspenders, and he has shaved half his head and pushed the remaining hair up into absurd twin peaks. His beautiful daughter, Polly (Erica Penn) wears sexy black tights and a kind of lace-up corset, and wields a whip. Adam Randolph, in a variety of roles, seems to be wearing countless layers of ragged clothes topped by an oversized trench coat and weird glasses, and most of the women in the cast are half naked and in disarray. And all of the cast members are heavily made up with black lines and smudges on their faces and dark smears around their eyes.

The mood is set in the opening number as the entire cast slowly comes out and groups and regroups in highly stylized, menacing and zombie-like movements as Randolph as the new beggar, Filch, unscrolls and reads the opening script and then sings the most famous of all songs from this show, “The Flick Knife Song,” better known as “Mack the Knife.”

From here the story unfolds, a story that glamorizes criminals and satirizes the rich and powerful – a social message epitomized by the question “Who is the bigger criminal: he who robs a bank or he who founds one?” Food for thought today more than ever.

Peachum and his wife, Celia (Jennie May Donnell) control the beggars of London and take a cut on all they can beg, borrow or steal. Their daughter, Polly, marries Macheath (Harrison Fry), a criminal better known as Mack the Knife. Determined to break up their marriage, Peachum conspires to get Macheath arrested and hanged by convincing a prostitute named Jenny (Bailey Boyd) to betray him. He’s arrested, he escapes and is arrested again. And the plot thickens when it turns out that the police chief, Jackie “Tiger” Brown (Jesse Derron Gold) is Macheath’s oldest friend (interpreted in this production as a gay man in love with Mack) and the chief’s daughter Lucy (Bianca Davis) turns up and claims to be Macheath’s wife.

From Holms’ over-the-top antics to Donnell’s lovable and slatternly Mrs. Peachum to Randolph’s ability to assume many different roles, the acting in this play is outstanding, even down to the smallest movements of chorus members whose only roles are to sing backup and move with grace and precision.

The play is funny and challenging. The language and the themes of violence and sexuality are definitely for adults only. And the music, a balance between opera and pop music, is great – not toe tapping and hummable tunes, but stirring and dramatic tunes.

If you enjoyed “Sweeny Todd” and “Cabaret,” you’ll love “The Threepenny Opera.” This is definitely not Disneyesque family entertainment.