Bayonet to the heart 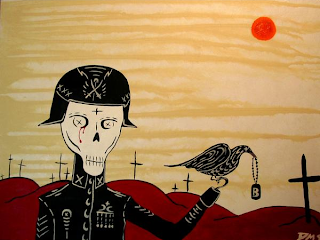 Disturbing show at the Lark

Like John McCain before the first debate, I’m going to suspend my campaign — sort of. Meaning that I’m going to quit being a critic — sort of. Because Matthew Scott’s show at Lark Gallery, At War, should be seen for its content and not necessarily for its artistic quality.

Scott, a former staff sergeant in the Air Force who served a year in combat in Afghanistan, is a self-taught artist who did not start painting until after coming home from war and recovering from war-related medical issues two years ago. He may not know a lot about design or color or the intricacies of paint application, but he knows a hell of a lot about war, and he has the vision and imagination to create haunting images that go right to the heart.

“His paintings depict the depersonalization of the individual and are stark reminders of what we ask of those who serve,” states a press release from the gallery.

Gallery publicist Jaci Hendricks says: “Every piece of art that Matthew creates tells a story of grief, conflict, and personal struggle, but the result evokes a feeling of awareness and raw emotion from the viewer.

“Matthew never planned to share these pieces with the public, choosing rather to keep them as silent memorials to his pain. As more and more people were introduced to his singular vision of this world and the suffering it contains, he realized that his experience resonated with many other people regardless of experience.”

Scott says: “I have suffered in solitude by choice as well as by circumstance for so long that I closed my eyes to the pain and need of others. Now as I see people looking at my work I feel a sense of kinship with my fellow man, and although the sorrow will never truly die for me or for them in that fleeting moment, we can share in each other’s grief and gain strength in the knowledge that we are never alone.”

There are eight paintings in the exhibition, all acrylic on canvas. The style is a graphic novel kind of surrealism with images outlined in black and colored in with predominantly red, black and white paint with little or no modeling or texture and with the only painterly touches being bloody drips of red. A lot of the images relate to mythologies and Eastern graphic traditions harkening back to ancient Egypt and the Ottoman Empire.

The most startling and powerfully graphic painting is Rank and File, which depicts a lineup of skeletons with bright orange faces in red military uniforms and, in the middle of the line, a white-faced man. Interestingly, the whole line tilts slightly to the right as if they are just the beginning parts of a line of domino men that are beginning to fall.

The most complex image is The Spell to Kill War (As periodo para matar guerra). A twisted line drawing of a female figure in black outline hovers over a field of orange waves. Below this figure is an intricate drawing of symbols and figures in white line over black. There may be various interpretations, and it may depict a specific mythology or perhaps a specific goddess I’m not aware of, but I assume the female is casting a spell over civilizations at war.

As in Rank and File, another skeleton face shows up in Funeral Rites. In this case the death head is wearing a Nazi-type uniform and has a deadly hook for a hand. He is standing in front of a line of graves on rolling hillsides. It is a stark and haunting image, and it was painted as a memorial to a personal friend who was killed in battle.

This show at the Lark is definitely no lark. It is a bayonet to the heart.

[The Lark Gallery, At War, through Oct. 12, noon to 5 p.m. Friday-Sunday or by appointment, 743 Broadway (Inside Sanford & Son Antiques), Tacoma, www.myspace.com/thelarkgallery]
Posted by Alec Clayton at 8:28 AM