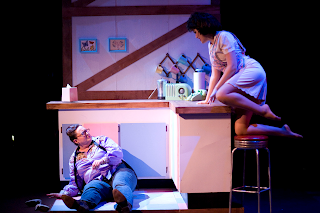 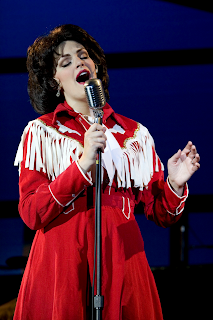 Patsy Cline was fabulous and so is “Always … Patsy Cline” at Centerstage, the musical based on a brief moment in her short and tragic life.

The play, written by Ted Swindley, is based on a true incident when a fanatic fan met and befriended her idol in a Texas honky-tonk.

The fan, Louise Seger (Kate Jaeger), is a frumpy, overworked single mother with a huge heart, and Jaeger plays her with comic perfection.

I might as well say right off the bat that the story, though true, touching and funny, doesn’t really matter at all. This show is all about the performance – Cayman Ilika’s marvelous voice and winning stage presence on those great songs, and Jaeger’s comic take on a lovable and somewhat crazy country music fan in 1961. As the narrator, Louise looks back many years later after she’s grown older and can no longer fit into her sexy yellow cowgirl pants.

Essentially, this play is a two-woman tour de force as Patsy Cline and Louise Seger meet and become best of friends over the course of one fabulous night in Texas. Many of the best moments in the play come from the contrasts of the two characters displayed in gesture and movement while Patsy sings and Louise watches, listens and dances. Often they are far apart on stage during these bits, and audience members are forced to look back and forth. Described here, that may sound awkward, but it was actually a brilliant bit of staging by director Erin Kraft. The only problem with that during the performance I watched was that audience members were laughing so loudly at Louise’s antics that I could barely hear Patsy sing.

The play opens with the five-piece country band coming on stage one at a time, each carrying a beer bottle and wearing a cowboy hat. They start playing, and Louise comes out and starts piddling around her kitchen and Patsy comes out in one of the outlandish cowgirl outfits she wore in the earlier years of her brief career.

As she sings “Honky Tonk Merry Go Round,” Louise addresses the audience and begins her story by reminiscing about when she first heard Patsy on an Arthur Godfrey TV show. From this point on, Jaeger as Louise alternates between narrating and acting the story while Ilika as Patsy drifts in and out of the scene wearing a variety of costumes ranging from sequined gowns to jeans and western shirts (costumes by Dana Friedli) and singing some 27 Patsy Cline hit tunes, including such greats as “Back in Baby’s Arms,” “I Fall to Pieces,” “Walkin’ After Midnight,” “Sweet Dreams” and “Crazy.”

Ilika is marvelous. She manages to capture the essence of Cline’s voice and style, particularly the semi-yodeling warble, without over doing it and while still maintaining her own singing style. She also looks enough like Cline to be believable, but she comes across as more glamorous than Patsy was.

And, she does something here I have never seen a singer in musical theater do. She opens Act 2 standing in one spot with a single spotlight, singing three songs in a row, and she holds the audience completely spellbound.

As for Jaeger as Louise – well, do you know the expression “She’s a hoot”? That expression could have been invented for this actress in this role. I usually avoid commenting on an actor’s weight, but Jaeger uses her size as a comic prop, jiggling and wearing too-large jeans that she constantly hitches up and stuffs her shirttail into. From her comic dance moves to the indolent way she holds a cigarette to her down-home Texas drawl, she nails this character – a character who is mostly bodacious and outrageous but with just the right touch of sweetness and pain.

Now for a personal note about the band. They sounded great, but they did not look authentic to me. Country musicians in 1961 did not have beards and they did not use music stands, especially not in honky-tonks. And while they would have been drinking beer in the ballroom, they would not have done so on stage at the Grand Ole Opry. And they probably would have all worn matching western shirts. I know this because in 1961 I was the drummer for a country band in Mississippi called the Southern Playboys.

That one little complaint aside, this is a fabulous show. I highly recommend it.