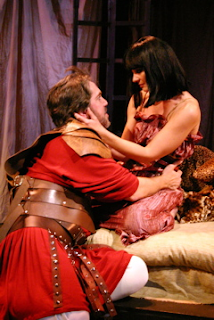 
One of the most difficult Shakespeare plays to produce is “Antony & Cleopatra.”

I spoke to director Scot Whitney before the opening of Harlequin Productions' performance of this tragedy, and he expressed trepidation, saying it is a tough play to bring off. It requires, among other things, top-notch professional actors in the lead roles as two larger-than-life characters who see themselves as descendents of gods. Whitney cast two of the best in these roles, Mari Nelson as Cleopatra and John Bogar as Antony.

Both Bogar and Nelson bring notable acting experience to their roles. Bogar has played in “Macbeth,” “Othello” and “The School for Scandal” with the Seattle Shakespeare Company. Nelson has performed on Broadway, in film and television, plus tons of Shakespeare, including “Twelfth Night” with New York’s Shakespeare Festival and last year’s production of the same play at the Seattle Rep.

In addition to these two fine actors, the show features two perennial local favorites in the person of Paul Purvine as Octavius (Caesar) and Dennis Rolly in multiple roles as Lepidus, Euphronius and a soothsayer and clown.

Nelson puts on one heck of a show as the legendary queen of Egypt. She is imperious, petulant, demanding, sexual, flirtatious and emotionally overwrought with both anger and heartbreak. How can a woman who believes she is descended from the goddess Isis be both a spoiled little girl and a heartbroken lover? To portray all of that takes some mighty large acting skills, and Nelson answers that challenge quite well.

Similarly, Bogar comes to the challenge of playing the boisterous, arrogant and love-smitten Mark Antony with panache.

Purvine plays Octavius Caesar with dignity and poise, and he looks the part. Some might think he’s too young, but Octavius was only 20 years old when he ascended to his power in Rome, and although the events depicted here took place over years, they are smartly condensed to a brief time period in the play.

Rolly is outstanding in various roles, most of which have needed comic underpinnings. He is like some of the great character actors that keep showing up in movies that everybody recognizes but few can identify and who are always kind of the same character no matter who they are playing (like Steve Buscemi or Harry Dean Stanton or William H. Macy before he became a big star).

Linda Whitney’s set has a heavy feel, and it serves well, without necessitating set changes, as both Cleopatra’s palace in Egypt and Caesar’s palace in Rome. The costumes by Monique Anderson were clearly well researched for historic accuracy. Changes in time and place are indicated by simple but effective light and music effects, with the only set changes being Cleopatra’s bed, which rolls out from behind a curtain and which at one point becomes a tavern where Caesar and his soldiers have a drunken night of singing (one of the best scenes in the play).

As with many of Shakespeare’s plays, the story is hard to follow if you do not already know the basic outline. Fortunately, the program for this play includes excellent commentary and synopsis, which help a lot. I would also suggest reading about it on Harlequin’s Web site before going.