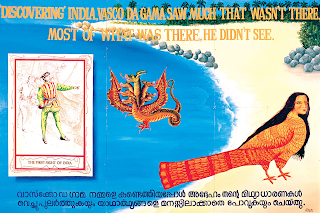 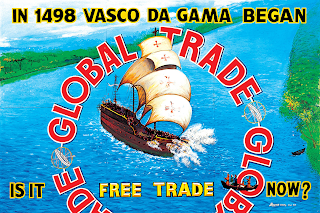 
Among the many exhibitions now showing at Tacoma Art Museum is one that may sound weird but that is filled with knockout images. It’s called What Is a Trade? Donald Fels and Signboard Painters of South India.

In 2005 Fels traveled to India to work with commercial signboard painters on a series of large-scale paintings based on Vasco da Gama’s 1498 voyage to India in search of a direct sea route for the spice trade.

Fels’ part in this project seems to have been sort of like that of a movie director. He provided the concept and vision and conveyed it to the Indian sign painters, giving them sketches and photos as starting points but encouraging them to interpret them in their own way. The resultant images are bright, colorful, bombastic, and very exciting.

The images are large and are stacked on the walls floor to ceiling. They are painted mostly in primary colors.

Of course there are stories and histories that are uniquely Indian, and one comes away with the strong feeling that the Indians are not overly fond of Vasco da Gama. Whereas Westerners may view him as a romantic explorer, the Indians see him more as an invader, much like the view American Indians have of Christopher Columbus — you know, the wonderful Italian explorer who discovered tribes of beautiful native people and then killed them.

But the style of these paintings seems to come from all over the world and from all of art history, meaning the art of the dominant Western culture. We see pop paintings reminiscent of James Rosenquist, whco, like these Indian painters, started out as a billboard painter and applied skills and design principles from billboard painting to fine art painting. We see pictures that remind us of David Salle with his harsh juxtaposition of images ripped right out of true-crime cover art. We see paintings reminiscent of propaganda posters from the Russian Revolution. We see bits of surrealism and of contemporary graffiti art. And due primarily to the nature of the materials these paintings are created with — enamel on aluminum — they have the look of advertisements seen along country roads and tacked on the sides of country stores here in the United States when I was growing up in the 1950s. Surely even young people today have seen some remnants of those and know the look I’m talking about.

The mishmash of styles turns the whole gallery into one big collage.

I suggest that viewers take it in this way: first, stand in the middle of the gallery and turn around slowly, letting the clash of images and colors wash over you, and then take them in one after another, reading all of the words and thinking about how they relate to history and world trade.

This brings us to Bollywood, India’s most popular export. We’ll probably never know who coined the term “Bollywood,” but I suspect it must have been an American. Just as Bollywood films are mostly musical extravaganzas that are unintentional parodies of Broadway and Hollywood musicals, the paintings in this exhibition look like take-offs on many aspects of Western fine and commercial art traditions.

In another gallery at TAM and promoted as a sister exhibition to What Is a Trade? is Oasis: Western Dreams of the Ottoman Empire from the Dahesh Museum of Art. This show also looks at Western concepts and representations of the East.

Rounding out the museum offerings are two large exhibitions culled from its ever-expanding permanent collection: The Surrealist Impulse and Speaking Parts. These shows include works as diverse as Salvadore Dali prints; paintings by Morris Graves; Mark Toby and Pierre-Auguste Renoir; a film by former Tacoman Jared Pappas-Kelly; and a terrific early wall hanging construction by Scott Fife, who is best known locally for the big dog in the museum lobby.

An overwhelming response of more than 8000 participants from 115 cities of India coming from the huge range of age, profession and cultural groups has motivated us to take the entire movement to the next level.When such an over whelming number of people join a platform, then there is an obvious need to make the platform larger.

the organisers of the Rang Rasiya Freedom of Expression Movement feel immense pleasure to introduce and welcome you all to a global Artist Networking Portal. Please join our artist's community at http://freedomofexpressionmovement.ning.com/ . We aim to make this community a platform which enables artists to interact with each other, exchange ideas around art making, viewing and showcasing. All this is just a part of our endeavour to make the Freedom of Expression Movement, the largest ever platform for artistic talent.

All of you have not yet participated in the competition log on towww.rangrasiya.com and chase the spirit of Raja Ravi Varma.
Let's come together and make a difference an Art Way.