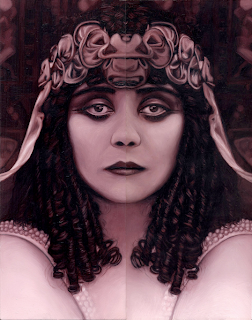 
My initial reaction to Rebecca Raven’s paintings at Childhood’s End Gallery was that they are a little too precious and way too gimmicky. Ten of her 11 gemlike paintings employ variations of a single gimmick.

Raven’s pictures are painted in oil on small copper plates that are framed by exquisitely crafted wooden frames — almost as if placed inside of jewelry boxes. On the bottom of each frame box are small metal knobs that viewers can turn to rotate parts of the copper plates upon which the pictures are painted. Each turn of a knob reveals a little surprise. Perhaps part of a face changes to give a figure a slightly different appearance, or maybe a figure goes away, or colors change, or a man becomes a woman. It’s like in the movies when a false wall or bookcase turns to reveal a hidden room. Only in this case, the wall that turns is a part of a painting.

If this trick was all there was to Raven’s paintings, looking at them would quickly become boring — turn the knob to see what’s on the other side, and once you’ve seen it you’re in on the joke, and there’s nothing left to entertain you. That would be the case except for one thing: these paintings are beautifully done with precise brushwork and lovely colors. And the imagery excites the imagination.

The images in her “Transfiguration” series come from film stills from the silent film era. Since I am not a connoisseur of silent films and there are no titles or labels to identify the individual images, I can’t identify the particular films or actors, but I’m pretty sure I recognized Buster Keaton and Harold Lloyd, and perhaps Clara Bow and Theda Bara.

On her Web site, Raven states: “I am interested, above all, in people and in the manners in which we communicate, express, and develop meaning. As an artist I find inspiration in gesture and in the subtle variations of facial expressions. … (My works) explore how these subtle changes of gesture, expression, and context serve to develop mood and narrative.”
What could be more perfect for conveying such subtle and expressive gestures than images from films in which actors had no words at their disposal but had to rely on expression and gesture to convey stories?

The reason my assessment of Raven’s paintings changed so quickly from dismissing them as gimmicky to admiration of her art is that her paintings beautifully meld content and form. Her painting style, her velvety monotone colors, and even the jewel box frames are all perfectly matched to the nostalgic subject matter. And with or without the surprises in store when you turn the knobs to see what changes, the intrigue of implied narrative is implicit in the actors’ gestures.

So, am I going to keep all of the surprise imagery a great mystery? No, I don’t think anything momentous will be given away by describing some of them. Some of the surprises are nothing more than slight color changes — so slight, in fact, that you have to keep turning the knobs to see what has actually changed. In “Transfiguration #27,” for instance, a standing woman is wearing a blue dress. Turn the knob and the entire painting is in a monotone blue. And then you can’t remember: Was her face blue on the other side? So you have to turn back to find out.

One of the most drastic comes from a Harold Lloyd film. Lloyd and an actress whom I can’t identify are pushing against a partially open door. On the other side, a large villain tries to hold them out. Turn the handle and suddenly Lloyd is pushing against himself.