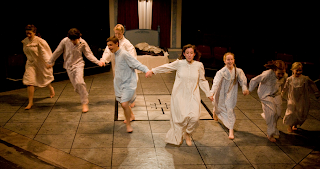 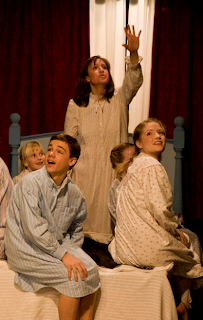 Pictured,top: The cast of the Lakewood Playhouse production of “The Sound of Music” includes, from left, Olivia Seward as Liesl, Hunter Larson as Friedrich, Kat Christensen as Louisa, Justin Neidermeyer as Kurt, Adrienne Grieco as Maria, Hanna Thoresen as Marta, Anna Rose LeMaster as Brigitta and Claire Thoresen as Gretl.


Certain roles by certain actors are so indelibly etched in the minds of theatergoers that they simply cannot be done by anyone else. Gregory Peck as Atticus in “To Kill a Mockingbird” comes to mind, and Jack Nicholson as R.P. McMurphy in “One Flew Over the Cuckoo’s Nest” and, perhaps the most iconic of them all, Julie Andrews as Maria in “The Sound of Music.”

And yet, 10 minutes into “The Sound of Music” at Lakewood Playhouse I forgot all about Julie Andrews. Adrienne Grieco is Maria. Seldom if ever have I seen an actor in a community theater so completely become a character.

Her voice is sweet and pure, her look wholesome and her emotions unabashedly right on the surface. Her expressions of pain and joy and her love for the von Trapp children go right to the heart. In the oh-so-popular film version, the sentimentality is sickeningly overdone, yet there is no taste of that false sentimentality in Grieco’s performance.

The same can be said for the actors who play the younger von Trapp children: Kat Christensen as Louisa, Anna Rose LeMaster as Brigitta, Justin Niedermeyer as Kurt, Hannah Thoreson as Marta and Claire Thoreson as Gretl. It is a joy to see their distrust of the new governess begin to melt away as Maria teaches them the delightful song “Do Re Me” and then turn to pure adoration as she sings “My Favorite Things” while the children huddle in her bed for protection from the scary thunder and lightning of a storm.

Christopher Gilbert as the crusty Capt. Georg von Trapp is stiff and unbending at first. Unlike Grieco and the children, he seems to be acting more than inhabiting the role – until he, like the children, melts under the warmth of Maria’s love. By the second act, the audience is as much in love with him as they are with Maria and the children. And his voice, though not as strong as Grieco’s, is mellow, warm and especially engaging on his duet with Grieco on “Something Good” and his solo on the touching “Edelweiss.”

Other performers who are outstanding are Carol Richmond, who plays housekeeper Frau Schmidt and doubles as one of the nuns; Marie Kelly (a terrific singer) as Capt. von Trapp’s fiancée, Elsa; and Ted Fredericks as Uncle Max Detweiler. (If there is such a thing as comic relief in this show, it is provided by Fredericks, who plays Uncle Max as a pompous rooster but ceases to be funny when he begins to cave in to the Nazi invaders.)

Lakewood Playhouse does all of their shows in the round, which means that set changes in a show like this are a huge challenge. But director Scott Campbell and set designer Doug Kerr solve it with simple pieces that are quickly moved by actors as they enter and exit the stage area.

I saw a preview performance, meaning it was the first performance with full set and lighting in front of a live audience. There were one or two entrances that were too slow, and the nuns singing “How Do You Solve a Problem Like Maria?” were somewhat tentative. But these slight problems were insignificant and fixable.

I wish it could have ended with the von Trapp family exiting the stage while singing the “So Long, Farewell” reprise. Everything after that – including the scene with Liesl’s boyfriend turned Nazi, Rolf (Steve Barnett) – was anticlimactic. But contrived as that scene is, it is necessary to the story, and a lot of people would probably be disappointed if it were left out.

For all its sentimentality and familiarity, this show is wonderful to watch. And as Lakewood Playhouse artistic director Marcus Walker warned in his welcoming remarks, it is hard to resist the temptation to sing along out loud.