This ‘Stardust’ dusts off great tunes 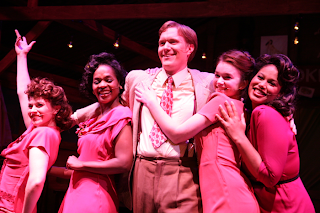 Published in The News Tribune, December 7, 2007

An isolated World War II supply depot in the Sahara Desert comes alive with swinging music in Harlequin Productions’ “Operation Stardust” – the latest in the stream of “Stardust” fantasies Harlequin presents as holiday fare every year. They’re all set during the war, and they all involve radio broadcasts with fabulous singers performing great old songs of the swing era.

The plots are rather thin and often absurd, but they’re loaded with romance and humor and are really little more than settings for all the music.

In this latest incarnation, Pvts. Joe Divitz (Nat Rayman) and Billy Monroe (Jason Thayer) are a couple of hapless supply clerks who think they are ordering starburst flares but actually put in an order for the Stardust Players, a USO troupe. And in what has to be one of the most improbable plot devices ever, the traveling troupe of entertainers is flown into the desert outpost where, since they’re there anyway, they join Pvts. Divitz and Monroe and Sgt. James Avery (Russ Holm) in an Armed Forces Radio broadcast.

In the broadcast, soldiers and entertainers join together to act out a silly tale that is loosely reminiscent of “Casablanca,” with harem girls, spies and ludicrous sound effects provided by Sgt. Joe. Being a radio skit, I guess it’s appropriate that the comic bits rely heavily on sound. Holm shows off his comedic talent using a variety of voices.

The radio skit goes on far too long, but ends with quite a bang as Act 1 draws to a close.

In Act 2, the story line is almost abandoned, and the entertainment dissolves into a musical revue. Thankfully. It is in the musical numbers that this troupe really shines, starting with Shimkus singing the great Kurt Weill classic “Mack the Knife” and later knocking the audience dead with the best bar song of all time, “One for My Baby (and One More for the Road).”

Shimkus is a real pro whom I recently had the privilege of seeing in “Twelfth Night” at Seattle Repertory Theatre. His hyper-cool facial expressions epitomize 1940s swingers. He truly inhabits the role of the self-possessed matinee idol.

The four women are all outstanding. Molenda doesn’t do much singing but has a strong voice. The other three are all of star quality, especially Darlene, whose beauty and grace simply command attention. She has proved herself as a soul diva in such musicals as “Dream Girls” and “Ain’t Misbehavin’,” but in this show she displays a melodious songbird quality I’ve not seen in her other performances – she is absolutely stunning on the classic love songs “I Remember You” and “P.S. I Love You.”

Hardison, known locally as Ruby of the duo Red and Ruby, was born for this role. On the great Johnny Mercer tune “Come Rain or Come Shine,” she is as sultry as Lena Horne or Billie Holiday, and she’s downright nasty on “You Got to See Your Mama Every Night.”

Rommel belts out blues and ballads with equal style and control. I especially loved her rendition of the Cole Porter classic “It’s All Right with Me.”

The three soldiers are on stage mostly for comedic and dramatic purposes and do not sing much. But they hold their own on their songs, and Holm really swings on his duet with Darlene on “Don’t Get Around Much Anymore.”

All that swinging singing is kicked along by a band led by musical director Debbie Evans on piano. The band members, who are on stage throughout, are all well-known local jazz musicians. They are: Keith Anderson, drums; Dan Blunck, saxophone; Rick Jarvela, bass; and Syd Potter, trumpet.