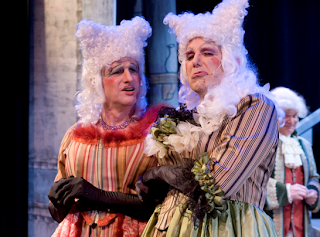 You may have seen other staged productions of the children’s fairy tale “Cinderella.” But unless you’ve seen it performed as a traditional English pantomime, you’ve never seen anything like the absolutely wild and crazy madness of Centerstage’s “Cinderella.”

Unlike the white-face pantomime most Americans are familiar with, the traditional British pantomime, usually performed at Christmas, is a madcap performance of song, dance, buffoonery, slapstick, in-jokes, audience participation and mild sexual innuendo – all loosely based on traditional children’s stories.

All of the familiar Cinderella story elements are in place: the poor, abused child; the evil stepsisters; the fairy godmother; the pumpkin turned into a coach; the beautiful ball; the dance with Prince Charming; and the final fitting of the glass slipper. But unlike the traditional story, this one seems to take place in Fife, and the ugly stepsisters (a pair of male actors in drag) do their shopping at the Commons in Federal Way. And Prince Charming (Hilary Heinz) and his servant, Dandini (Alexandra Blouin), are played by two tall and beautiful girls – changing gender roles being another tradition of the British pantomime.

In addition to the gender swap, there is also the Shakespearean device of one character pretending to be another; in this case, the prince pretends to be Dandini, and Dandini pretends to be the prince.

The fairy godmother (played with charm and grace by Rosalie Hilburn) begins the festivities by scolding the audience for not giving her a proper welcome, thus establishing from the opening curtain that audience responses are expected.

The lovely Cinderella (Alicia Mendez) and the chorus sing a welcoming song, “Gee But It’s Good to Be Here,” and then the ugly, ugly, ugly stepsisters, Britney (Roger Curtis) and Beyoncé (Terry Edward Moore) make their presence known with the rousing and slightly altered song “Sisters,” made famous by Rosemary Clooney and Vera-Ellen in the movie “White Christmas” – twisted versions of familiar songs being yet another tradition of the British pantomime.

Characters not included in the original fairy tale but essential to the pantomime include Cinderella’s father, Baron Hard-Up (Tom Butterworth), who is lovable but bumbling and completely under the thumb of his nasty stepdaughters; and Cinderella’s best friend, the lovable servant Buttons (Scott Polovitch-Davis).

Buttons is in love with Cinderella, and he establishes a special rapport with the children in the audience. Polovitch-Davis throws himself into the role with great gusto, playing to the children in the manner of J.P. Patches the clown or Pee-wee Herman. He asks all the boys and girls to give the secret signal whenever he comes out and shouts “Whassup gang?” and to shout out a warning whenever someone approaches his magic button. As intended, Buttons steals the show whenever he is on stage. Only Curtis and Moore with their outlandish drag queen antics can hold their own with Buttons on stage.

Heinz and Blouin, as Prince Charming and Dandini, respectively, pull off some rousing comic bits: Dandini tries to mimic the prince’s regal walk and ends up walking like a frog, and Prince Charming swings his arms like a gorilla while trying to emulate Dandini’s more casual walk. They are perfect comic counterpoints to the gangly stepsisters as they look like fashion models with long legs accentuated by very high heels.

All in all, this “Cinderella” is wonderfully campy and joyfully entertaining for kids of all ages.