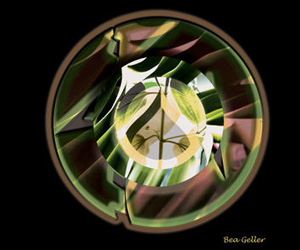 
I dropped by a.o.c. gallery to see a group show that was described as a kind of transition show between the old a.o.c. managed by the husband-and-wife partnership of C.J. Swanson and David N. Goldberg and the new artists-owned cooperative gallery managed by, as the name implies, the participating artists (see how cleverly they kept the initials that originally stood for Art on Center).

I don’t know if all of the new artist-owners are represented in the group show, which is called “Own It,” or if all of the artists represented in this show are members of the cooperative. But it will be interesting to see how the change in ownership and management will affect this gallery, which has been one of the best in Tacoma since it opened in 2005.

This show is a little uneven, but pretty good.

Sobotka is showing a number of works on paper that look like charcoal but, according to the wall labels, are stencils with various media, including soil. The best of these are “Neighborhood Coyote” and “Presence.” “Neighborhood Coyote” is a drawing of delicately modulated sticks and leaves scattered along the lower half of the picture with a white stencil of a coyote against gray leaves in the upper right-hand corner with a lot of white space in between. “Presence” goes even further in balancing drawn and stenciled areas against blank white space. This is Sobotka’s best work in the show. His other stencil drawings have a lot more going on and seem contrived and overworked by comparison.

Gilder, a photographer, has a single photograph on the wall. Called “Light in Motion #80,” it is an abstract form created by red light moving against a black backdrop. It looks more like a painting than a photograph, and it is striking. Not hung on the gallery walls but stacked in a bin are some Gilder photographs of Tacoma scenes, which are nice.

Printmaker Bill Colby is showing a number of wood cut and intaglio prints that are simple in design and mystical in nature, reminiscent of Morris Graves.

McCuistion’s acrylic and photo-transfer paintings on wood panels are off-putting at first glance, but they have a way of getting under your skin. They are ironic commentaries on — as she puts it in a wall statement — “the displacement of animals, loss of habitat and diversion of precious resources that occurs when humans ‘develop’ a piece of land, in this case Pierce County’s Chambers Bay Golf Course.” So we see a golf ball in a bird’s nest in a painting titled “Hole in One,” a “Sandtrap” with a cow skull, and a tiger on a golf ball titled “Tiger Woods.”
PLU art professor Bea Geller is showing some striking digital prints of plants seen within iconic circular shapes that are something like camera lenses giving focus and sharpness to the images and one long, thin digital image of birch trees in three panels with globelike lenses inserted to focus on specific areas.

Trenda Love is showing a group of small landscape paintings with heavy impasto paint and circular and square bits of mirror attached. Without the mirrors the paintings would be pretty strong, but the mirrors are gimmicky and distracting.

Finally, Swanson and Goldberg, whose work is very familiar by now, are showing some excellent abstract paintings. The transparencies in Goldberg’s paintings are outstanding as is the balanced dance of circles and rectangles in Swanson’s “Forest Guide.”