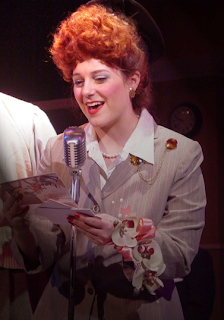 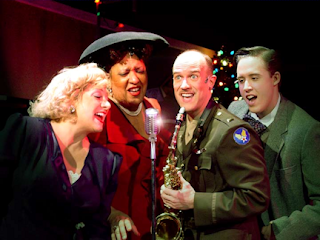 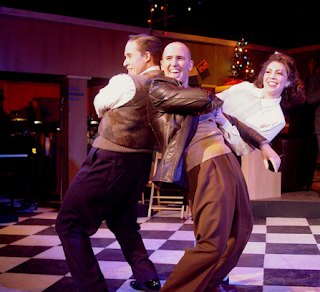 Walton Jones’ play “1940’s Radio Hour” is much more than just a set piece for a swing-era music revue. It’s a funny, touching and naturalistic play with fully developed plot and characters loaded with nostalgia and vaudevillian silliness, but with an underlying tragic tone.

The authentic art deco set designed by Bruce Haasl, the very realistic blocking by director and musical director Troy Arnold Fisher, and the unaffected acting by the entire cast all combine to make the audience feel they are actually there in the station as a live radio show audience.

There is no curtain and no curtain speech. Even as audience members chatter with one another and before the lights go down, employees of the radio station go to work.

Pops (Bernie Brady), a crusty old stage manager, comes in, hangs up his hat and gets on the phone to his bookie; Clifton Feddington (Gregory Conn), the no-nonsense station manager and announcer, shouts at cast and crew members who are anything but ready for the Christmas show that’s due to start in just a few minutes; singer Ginger Brooks (Sheri Tipton-Hasson) lounges around the station in her slip and an oversized and quite pointed brassiere that looks like a pair of WWII bombs; matinee idol Johnny Cantone (Matt Posner) comes in and confides to one of the other people in the cast that he is quitting the show to go to Hollywood.

The whole station is a madhouse of activity. Everyone is milling around and talking over one another – from stars to band members to the delivery boy who wants to break into show business (Wally Fergusson, played by Capital High School student Eddie Carroll).

With the band tuning up and everyone talking at once on different parts of the stage, it absolutely draws the audience in to a believable set.

Then the radio broadcast starts. Clifton welcomes the audience with a deep and resonant voice that sounds like the archetype of every great male radio announcer there’s ever been. Then, with the crew harmonizing on background vocals, he sings a wonderful swing rendition of the Glenn Miller standard “I’ve Got a Gal in Kalamazoo.”

While the cast of Radio Station WOV produces “The Mutual Manhattan Variety Cavalcade,” the stories of cast and crew members play out like a barely noticeable undercurrent to the music – their loves and their jealousies and the aspirations of wannabe stars. And throughout it all is awareness of the war overseas and the naive optimism of Americans, as personified by Biff Baker (Alan Fuller), who thought in the early years of the war that our soldiers would quickly win and come home.

Fuller is wonderful in this role. It takes a heap of talent to act, sing and play hot saxophone solos, and he does it all well.

Brady, as Pops Bailey, and Matt Flores, as the self-important stage manager and sound effects man, Lou Cohn, do great turns as character actors. The rest of the cast are singers who belt them out with style. Each stands out in his or her own way, but none quite so much as Jerod Richard Nace as the station’s comedian, Neal Tilden; Carroll as the innocent and infatuated delivery boy; and Adam Randolph as the all-American boy and up-and-coming star, B.J. Gibson – all of whom provide touching and comic moments.

Randolph is particularly outstanding as he goes from hesitant bumbling to enthusiastic swinging as the third “girl” in the Andrews Sisters song “Boogie Woogie Bugle Boy” with Ginger and girl-next-door singer Connie Miller (Erica Penn).