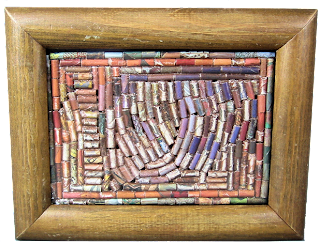 Dying to get inside One Heart Cafe

Saturday morning I waited outside of One Heart Café with a bunch of artists from the gallery formerly known as a.o.c., hoping someone would come and let us in. There was supposed to be a meeting over coffee of these artists who are taking over the management of the gallery. But the café was not open. A flashing neon sign said OPEN, and the hours posted on the window seemed to agree with our watches, but we couldn’t get in.

And I very much wanted to get in, not only because it was cold outside but because I could see through the window a display of collages by Elaine Faaborg that I wanted to get a closer look at.

The artists’ meeting moved to Tully’s, and I never did get that close look at Faaborg’s collages. I did, however, see a bunch online.

Faaborg, I’m told, is an octogenarian. That in itself is fairly fascinating. But her art should be recognized for its intrinsic value, not because the artist has been on this earth a long time.
Faaborg’s collages — made mostly of materials traditionally associated with women’s crafts and including any old thing she can find around the house — have a homespun look and are beautifully designed, although some are a bit too cute for me.

According to Shari Hart from Tacoma’s Community & Economic Development, Faaborg “is an artistic gem. She finds and defines beauty in ordinary and unusual found items. Her artwork will draw you into layer upon layer of created pieces, collaged with a variety of materials and repurposed elements” including “the magic of old metal computer tape incorporated into beautiful weavings, embellished with square glass tiles and the beauty that can be created from old magazines.”

Hart goes on to say that Faaborg “has spent most of her 85 years refining her skills and giving workshops in basketry, batik, weaving, stitchery, painting, etc.

Elaine’s work has a world/tribal feel and each piece is a work of love-filled art. She reminds us all to look for beauty and possibility in ordinary life, in everyday things, and in everyone.”
Wow! I really regret not getting to see her show, but I will go back.

Judging from the photographs, the best of her works are a group of collages made from paper beads that she makes by cutting up old magazines and rolling them into tight cylinders and pasting them on a flat surface. These look like elegant and densely-packed logjams flowing in curvilinear patterns. I love them.

Proceeds from the sale of art in the exhibition will support Project One Heart, a non-profit that provides art-related youth outreach activities through the YWCA.

And now a word or two about the meeting of artists that was relocated to Tully’s on Broadway. The artists involved are the core group of artists who now own and operation the cooperative gallery once known as a.o.c. and soon to be re-named Gallery Impromptu (you heard it here first).

They are: Bill Colby, Trinda Love, Bea Geller, Chip van Gelder, Dorothy McCuistion and Jason Sobottka. And they are recruiting other artists.

I can’t say much more about their plans for the gallery, which is next door to One Hart Café, which is next door to the Grand Cinema, which is next door to Two Vaults Gallery — what an amazing block — because it’s not clear how solid their plans are right now. But they plan to have group shows and possibly one-person shows of their own work and works by guest artists, plus, tentatively, a juried exhibition to come in February or March. In the meantime, the sign on the window still says a.o.c. and the works on display are by the same artists who were in the “Own It!” show in December, but with all new works.

The bottom line is, if you like good art and coffee and movies, you can’t beat the 600 block of Fawcett.