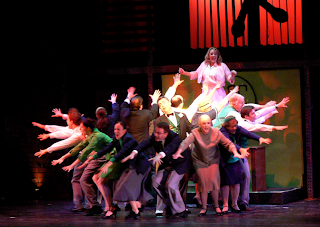 pictured: one of many big song and dance numbers in "Urinetown," photo by Kat Dollarhide

It does not live up to any of the normal expectations of a musical comedy. It is satirical and cynical to the extreme. It addresses such major issues as corporate greed, government corruption and the tyrannical subjugation of the weak and powerless by the rich and powerful. And it also parodies musical comedy as a genre, making relentless fun of itself in a curious mix of the ultra serious and the ultra absurd.

Set in an unidentified town in the not-too-distant future, The UGC Corporation (Urine Good Company) has control of all public restroom facilities, which are run on a “pay to pee” basis. There are no private facilities (except, presumably, in the boardrooms at UGC, but this is never mentioned), and going in the bushes is strictly against the law. Anyone caught doing so is banished to Urinetown – a mysterious place none of the people have ever seen and no one has ever returned from.

The people rebel, storming Amenity No. 9 and refusing to pay. They are led in their revolution by an idealistic young hero, Bobby Strong (Matt Posner).

The head of UGC is the evil Caldwell B. Cladwell (Andrew Fry). Mr. Cladwell has a daughter named Hope (Caresse Lemieux) who has just graduated from “the most expensive college in the world” and is going to work for her father as a fax and copy girl. And wouldn’t you just know it? Hope falls in love with Bobby and becomes a pawn in the battle between her lover and her father.

The police, who enforce the draconian laws put into effect by Cladwell, are led by a couple of Keystone Kop types: Officer Lockstock (Mark Rake-Marona) and Officer Barrel (Chris Serface). In addition to being the top cop, Officer Lockstock steps out of character throughout the play to narrate, explaining what is going on to the audience and answering the pesky questions of Little Sally (Laura Posey).

When she asks what’s going on, he explains that it’s the big musical number where the whole cast comes on stage to sing and dance; and when she worries about a developing situation, he tells her it will be worked out in Act 2. He also warns her that this is not a happy musical.

Officer Lockstock is a pragmatic cop, and his bits with Little Sally are a series of Burns and Allen-like sketches that he plays like a series of vaudeville shticks and she plays with a wide-eyed innocence somewhere between Gracie Allen and Little Orphan Annie.

The overall look and feel of this play, as well as the dramatic arch of the story line, is borrowed from “Les Misérables” and is presented in such a way as to deflate such serious musicals. There are dances and crowd scenes that borrow directly from “Les Misérables” and from other popular musicals such as “Fiddler on the Roof” and “West Side Story.” (The strange twist they give to the bottle dance from “Fiddler” is worth the price of admission.)

The entire cast and crew are outstanding. The set by scenic artist Dori Conklin, with set construction by Patrick Murray and Stephen Leonard, is one of the best I’ve ever seen from Tacoma Musical Playhouse, made even better by John Chenault’s superb lighting. The only sore spot in this great set is the big UGC logo, which looks like it was designed by a mediocre sophomore art student.

Lemieux and Kae Blum as Penelope Pennywise are terrific singers, as is Posner. The three of them play their roles with utmost earnestness. Rake-Marona, who has been in almost every show I’ve ever seen at TMP, has found a perfect fit as Officer Lockstock.

As usual at TMP, the big song and dance numbers are show stoppers. The choreography is better and the dancers more exuberant than I’ve seen since “Thoroughly Modern Millie.”