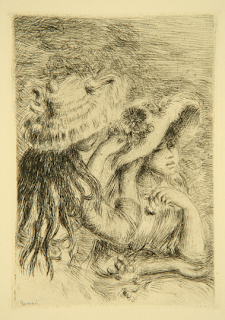 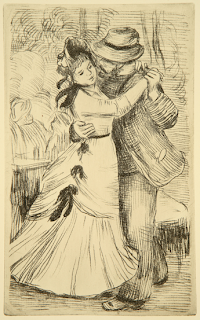 Some consider Pierre-Auguste Renoir one of the lesser of the great French impressionist painters. Admired for his glowing, rosy colors, he is nevertheless considered far too romantic and too syrupy sweet. His paintings are seen as somewhat mushy, and his pear-shaped nudes are anything but beautiful. Yet, all of that criticism comes tumbling down like an ill-constructed house of cards when viewing his prints — and he was never well known as a printmaker.

For an artist admired as a colorist, ironically it is the lack of color in his prints that brings out the best in these works. No longer blinded by the confection of his color, we see here what a marvelous draftsman he was. We see the variety of his contour lines, the rhythm of his stroke, his delicate touch, his mastery of tonal contrasts.

It was famously said of Cezanne that he was nothing but an eye, but what an eye. Looking at Renoir’s prints, I can imagine it being said he was nothing but a hand, but what a hand. And that is doubly amazing considering that most of these prints were done late in life when he was suffering from rheumatoid arthritis. His hands were so gnarled and painful that he could barely hold the lithographic crayons he drew with. By the early 1900s, he was so crippled that assistants strapped his paint brushes to his hand.

Renoir did not take up printmaking until late in his career, partly at the urging of others and partly because he saw it as a way to easily meet the demand for his work in his later years. There was, at the time, a resurgence in printmaking, and many of Renoir’s contemporaries took it up.

“Renoir and his fellow French impressionists welcomed the mid-19th-century revival of printmaking as an art form,” says Margaret Bullock, Tacoma Art Museum curator of collections and special exhibitions and curator of the Renoir exhibition. “It allowed them to pursue some of the same subjects they were exploring in their paintings. They used loose, expressive gestures; captured fleeting moments in time; revisited a motif at different seasons or times of day; and depicted scenes from everyday life through printmaking as much as through painting. Prints also appealed to the impressionists because they were inexpensive and made the artwork easily available to the general public.”

For Renoir, etching and lithographs were an adjunct to painting, and although some of the works in this exhibition are highly finished, most are sketchy, and the many variations on a few themes indicate that he also used printmaking as a way of experimenting with different solutions to aesthetic problems. This is seen in the nudes, where only one or two models and the same two poses show up over and over. There is a seated nude seen from behind and to one side with her body slightly twisted and a reclining nude. These same two nudes are seen facing left and facing right, in sepia tones, in black and white and in color, in etchings and in lithographs. And both are familiar from famous Renoir paintings. Similarly, there are many variations on the theme of two young girls with flowery hats. In most versions one of the girls is pinning flowers on the other’s hat. Also included in the exhibition is the painting of this same subject, “Têtes de deux jeunes filles” (also known as “The Two Sisters”), from Tacoma Art Museum’s collection.

It is fascinating to compare the many variations of the same pictures.

Drawn from a local private collection, this exhibition comprises the complete known collection of Renoir’s graphic art, and it will be shown exclusively at Tacoma Art Museum. It includes 25 etchings and 35 lithographs. In addition to the many nudes and studies of children at play, there are many portraits of Renoir’s children and of his artist friends. Among the portraits are one of Berthe Morisot, one of Paul Cezanne, and a rather stern portrait of the composer Richard Wagner.

Getting this show in Tacoma is a real coup.

I have a copy of "Pinning the Hat" I wasn"t sure if it was an original but now I see the work on your site. It is definately old just how old and valuable or not might it be. Any input? It is quite a beautiful pic. Bev

It's probably one of many copies in multiple editions and not worth anything, but who knows? If it's a limited edition print it could be worth a lot.