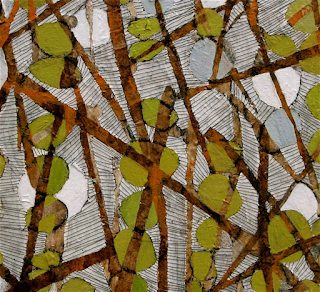 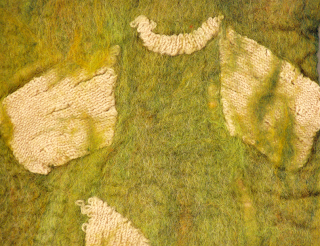 Faith Hagenhofer is among the more inventive artists working in the South Sound region. I especially appreciate the many ways in which she takes advantage of and, in some cases, works against the natural properties of her chosen media — felt, mostly felt; woven, matted, soft and furry felt.

Hagenhofer has about eight pieces in this show. A few wall pieces, a hanging sculpture, other sculptures attached to the wall, and two pieces of furniture. A press release calls the furniture functional, but a sign in the gallery asks visitors not to sit on her chairs, which would indicate to me that they’re not very functional after all. They are, however, very attractive.

The best things in the show are two wall hangings that function aesthetically as paintings. Called “Resettlement” and “Remains,” they consist of groups of flat felt sheets in beautiful shades of glowing olive green. On these green backgrounds are the shapes of shirts in a dark gray-blue (“Resettlement”) and beige (“Remains”). To explain further: There are four rectangular shapes in “Resettlement.” Random smaller rectangles in dark blue float on the surface of the far left rectangle. One step to the right there are fewer and larger floating blue rectangles. One more step to the right and they come together to form an almost recognizable shirt shape, and the shirt takes even more shape in the last one. In other words, random floating shapes resettle themselves into a shirt front. In “Remains,” a similar process takes place. Only in this one, the shirt vanishes little by little until at last there is nothing left but a ghost image in the form of an irregular ridge.

Hagenhofer also shows a couple of sculptural pieces that I find a little too gimmicky even though they are beautifully crafted. They are pieces of furniture cut in half and displayed against the wall so as to look like they are coming out of the wall.
Also outstanding is a sculptural Jacob’s ladder made from pillows hanging on a pulley and rope device. It is interactive with moving parts viewers can control, but that part didn’t impress me as much as the abstract form. The pillows are decorated with woven pictures of a woman’s face in beautiful tones of gray and black like a sensitive charcoal drawing. The formal elements are beautiful, but I wish the faces were not recognizable as such. It seems to me that she did the faces as a concession to the public.

Also showing are works in acrylic, paper and nylon by Julie Simpson. The best of these are probably the three works in a series called “Stitch,” which consists of overlapping patterns of tree branches and green leaves and thin black lines. The lines, which look like they were drawn with the finest of ink pens, are actually inlaid nylon threads. There is also a similar large painting on heavy black impasto and a group of six 5-inch by 5-inch paintings of abstract landscapes in orange, green and white. Here again are incredibly thin black lines that I suspect are also nylon threads although I can’t tell for sure from looking.

We know from solicitation letters the gallery has sent out that it is on its last leg financially. That’s a shame, but it’s not unexpected. This area has never been very supportive of contemporary galleries. I don’t know how many more shows the gallery will have, but this one, at least, will run through Jan. 29. Go see it while you can.