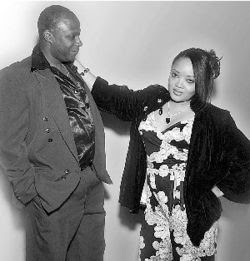 The theater’s Web site states: “Considered one of the most powerful, as well as controversial, pieces in African American theatrical literature, this brilliant collection of comic and dramatic sketches examines the legacy and realities of the black experience in America.”

It is presented as 11 skits, each staged as a kind of museum diorama with revolving sets.

The setting for the first skit, “Git on Board,” is an airplane flying through time with stopovers at moments of black history. (The airplane is also a slave ship.)

A saucy airline hostess named Miss Pat (Ashanti Mangum) welcomes passenger slaves onboard and instructs them on how to fasten their shackles. She tells them to enjoy the flight but obey the rules: no drumming, no call and response, no rebellion, and wear shackles at all times. Her costume is 1960s airline stewardess, but her attitude is hip-hop jive.

This opening bit sets the mood for pieces to come, which range from satire to camp to horror and melodrama.

“The Photo Session” features two Ebony magazine models (Celeste Richardson and Jeffrey Brown) who are aware that their lives are phony.

“Soldier with a Secret” is a hauntingly sad piece with David Dear playing a soldier who has died and come back to life. He painfully relates how he was caught in an explosion and the skin melted right off his arms down to the bone, and he didn’t even feel any pain. That was how he knew he was dead. He didn’t feel any pain.

“The Gospel According in Miss Roj” stars Brown as a wisecracking gay man who refers to herself with feminine pronouns and calls herself the Snap Queen. When she makes a telling point she emphasizes it with an emphatic snap of her fingers. Miss Roj covers up a lot of pain with her sassy attitude.

“The Hair Piece” is one of the most surrealistic scenes I’ve ever seen acted out on stage. Carmen Brantley-Payne enters a dressing room and sits in front of a mirror. In front of her are two mannequin wig holders that come alive and argue over which of them she will wear. The wigs are Richardson and LaNita Hudson.

The only piece involving the full cast, “The Last Man on the Couch Play” is a play within a play that parodies such African American dramas as “For Colored Girls Who Have Considered Suicide/When the Rainbow is Enuff” and “A Raisin in the Sun.” In it, the characters take turns trying to out-act one another.

Questions of blackness come up in numerous skits, bringing to mind the current flap over whether or not Barack Obama is black enough. Dear, who has light skin, says he’s colored only on the weekends in one sketch, and in another he symbolically throws away everything that reminds him of his blackness and divorces himself from his own rage (personified by Brown).

Another surrealistic and highly melodramatic skit is “Lala’s Opening,” which is both an acting and a singing tour de force for Mangum. This skit goes a little too long and begins to drag in places, but it is worth the wait to get to the shocking end.

“The Colored Museum” is not an easy play to watch. It does not have mass appeal, and it is recommended for mature audiences due to adult language and situations.

It opens tonight and runs two weekends only. I saw it in rehearsal and would love to see it again.