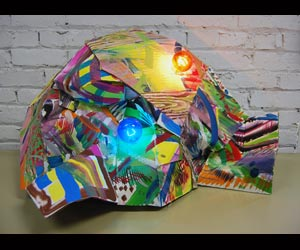 
For starters, the exhibition called “This is a Time Machine” at The Helm is colorful and visually exciting, and it begs some interesting questions about the use of found objects in art. Such as just how much of the work should actually be created by the artist? Is it enough for the artist to choose the work and stick it in the gallery — a time-honored tradition that goes back to Marcel Duchamp’s famous “Fountain” — or should the artist actually make some aesthetic judgments about the placement of the found objects as Ellen Ito and Nicholas Nyland have done in this collaborative work?

There are only two works in this installation. In the front room is an enclosure that looks like a Quonset hut made of colorful sheets of cardboard. It fills the entire room, leaving barely enough space for viewers to walk around it. It is the title piece, “Time Machine.” In the back room is a piece called “Affinity” that consists of 20-something found afghans draped around a corner of the room and taking up two walls.

What these two works have in common is brilliant color and a mishmash of patterns that are so wild you would think they would clash like striped pants and a plaid shirt. There are bright pink, yellow, blue, green, orange, and violet stripes, bands, checks, zigzags, circles, squares, and various squiggly marks that all fit together amazingly well.

In “Affinity,” all of these colors are parts of traditional patterns. In “Time Machine,” they are painted by hand by Ito and Nyland on cardboard that is cut into various shapes (predominantly triangular) and attached to a rickety wooden frame. Added to this are colored lightbulbs that encircle the outer shell. The inside is left unfinished and unpainted — raw wood and unpainted cardboard with numerous gaps that let light in. Two ottomans draped with colorful afghans sit on the floor inside next to a large globe light on the floor.

My initial reaction was that the inside should have been finished in some manner, perhaps with an inner skin reflective of the outer skin. But as I looked at it I began to think that maybe there’s some artistic reason for leaving the unadorned evidence of how the object was made and not attempting to pretty it up. And I found that the chance patterns created by light coming through the openings and the structural grid were aesthetically pleasing. Although, I still think the artists could have found a more artistic way of finishing the interior that would have maintained that look. And I think the lightbulbs attached to the outside are a distraction that adds nothing to the look.

Overall, the ideas expressed and the construction are thought provoking and attractive. Best of all is the wonderfully playful painting on the outer shell done with loosely brushed tempera paint in bright, semi-transparent colors.

I find “Affinity” more questionable as art. A basic premise of found art is the discovery of beauty in objects that were not originally intended to be beautiful. The prototype, Duchamp’s “Fountain,” was a common urinal, an object of common and profane use that was never intended to be beautiful; yet, many an art lover has commented on its formal beauty. Afghans, on the other hand, are made with an eye toward beauty. And displaying them in this manner is no different than displaying them in a show window for sale. It is, in fact, very beautiful. But I question it as a work of art.

I could be wrong. I’ll admit this much: If I had seen the “Fountain” when it was first displayed rather than having read about it in art history books, I probably would have thought it was downright stupid and ugly to boot. I could be equally wrong about “Affinity.” So I encourage you to see this show and judge for yourself.

[The Helm, “This is Time Machine” by Ellen Ito and Nicholas Nyland, Thursday-Saturday noon to 6 p.m., through Feb. 13, 760 Broadway, Tacoma]
Posted by Alec Clayton at 8:52 AM