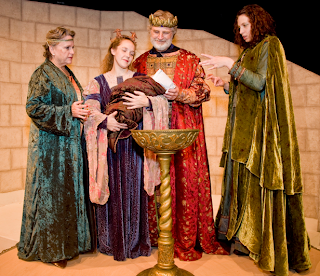 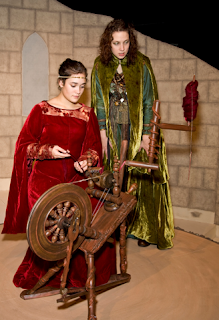 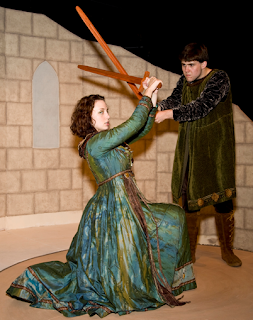 combat- featuring from left to right: Amanda Eldredge as Modron and Chris Cline as Prince Owain

The Charles Way and Chad Henry musical version of the classic tale “Sleeping Beauty,” now playing at Tacoma Little Theatre, is based primarily on the Brothers Grimm version of the early 17th-century tales “Sun, Moon and Talia” by Giambattista Basile and “The Sleeping Beauty in the Woods,” a “Mother Goose” tale by Charles Perrault. It bears little resemblance to the well-known Disney film, which I think is a very good thing.

“The story goes back way beyond the days of the Brothers Grimm, and it crosses many cultural boundaries,” writes director Charlotte Tiencken in the program. “What I love about the Sleeping Beauty story … is that the author has modernized the tale to make it a story of which we can all relate. It’s a story of growing up, facing one’s fears, becoming your own person and, of course, following your dreams.”

It is not the script, sets or costumes that has been modernized. They still hearken back to the medieval period. Rather, it is the spirit and attitude that is modernized in its use of humor based on modern sensibilities. Princess Briar Rose (Gerianne Perkins) has a spunky modern spirit, and Prince Owain (Chris Cline) is a modern-day, goodhearted doofus.

The story begins as two magical sisters, Branwen (Penny Clapp) and Modron (Amanda Eldredge), find an abandoned infant in the woods. The baby is Briar Rose, the princess known as Sleeping Beauty.

Both sisters want to keep the infant, but when Branwen, the good sister, gives the baby to the king and queen, Modron, the evil sister, decides that if she can’t have the baby no one can, and she casts a spell on her. By her 16th birthday, Briar Rose will prick her finger on a spindle and fall to her death.

Branwen wants to break the spell, but she can’t. The best she can do is change it so that instead of dying Briar Rose will fall asleep for 100 years, and only a true love’s kiss can awaken her.

The king and queen burn all the spindles in the land and never allow their daughter to leave the castle, and so Briar Rose has a lonely childhood. To watch over and protect her, Branwen sends her a sweet companion, the half-man, half-dragon Gryff (John Kelly). And to relieve her loneliness, her parents bring her a playmate, Owain, a bumbling prince whose own father has declared completely useless but who nevertheless has a big heart.

Children in the audience the night I watched the play seemed to have a wonderful time watching Owain and Gryff bumble their way to eventually saving Sleeping Beauty from the evil spell. At times, they even took part, making comments to the actors and those around them.

Perkins, Cline and Kelly interact wonderfully as the three primary characters, and Clapp and Eldredge are well cast as the fairy sisters.

In addition to being important characters in the story – epitomizing the struggle between good and evil – Branwen and Modron act as narrators, setting the scene with the haunting opening melody “Once Upon a Time.”

The most delightful musical numbers are the ones featuring Briar Rose, Gryff and Owain, especially the rousing and upbeat “If I Could Fly” and “Everyone’s Good at Something.”

The sets, lighting and costumes are some of the best I’ve seen in this theater in a long time. The simple, buff-colored castle wall is warm and inviting, and the opening blue light behind the castle is beautiful. The dresses worn by Briar Rose and the fairy sisters look rich and authentic. Many of these costumes were designed by noted costumer Cathy Hunt for the Seattle Children’s Theatre’s West Coast premiere, with additional costumes by Brie Crawley. Sets are by Erin Chanfrau, and lighting is by Scott O’Donnell.

The play is recommended for ages 5 and older. It is entertaining for adults and children alike.