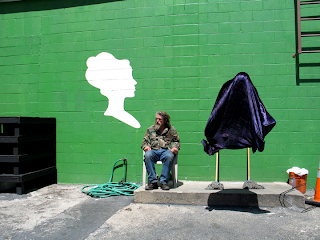 Nine wild and crazy artists at the Helm

The new show at The Helm may be called “Don’t Be Absurd,” but it is all about absurdities such as shapeless cloths leaping into the air on city streets and cutely menacing creatures that are half whale and half swordfish.

Works by nine artists cram the little gallery. Some of the artists are from other parts of the country, such as Eric Shaw from Brooklyn, N.Y., who is pretty well known. Others are local or regional artists such as Trevor Dickson of Tacoma and Darin Shuler from Seattle, a recent Artist Trust grant recipient. Other artists in the show are: Seth Adelsberger, Mike Andrews, William Hundley, James Orlando, Jimmy Joe Roche, and Matt Vanhorn.

Most of the works in the show fall loosely into the category of pop-surrealism, and three of the artists — Shaw, Dickson and Shuler — are graphic artists of the fantasy stripe whose ancestors include ’60s underground artists such as Robert Crumb and Jim Nutt. And Adelsberger’s work is of a similar kind of post-psychedelic, drug-inspired style but more abstract.

Dickson’s drawings are like weird cartoons that might be drawn by 6-year-olds on drugs. They are crudely drawn and strangely funny. At least, some of them are funny while some of them I simply don’t get.

Shaw’s are filled with intricate line work that looks to be drug-induced (I remember drawing stuff like that while high on speed in 1974, but mine were neither as inventive nor as well drawn). Shaw places cartoon figures in interior spaces, often sitting or floating in impossible positions, and intersperses them with white silhouettes of figures that are filled with minute line drawings. Pretty amazing stuff.

It is almost impossible to describe Shuler’s drawings, except to say they are comically menacing and include strange hybrid sea creatures and animals that combine bird and human parts. I really enjoyed them.

The best pure art in the show comes from fiber artist Mike Andrews. Included are two quilts by Andrews, both titled “Guilty Quilty,” and a wall-hanging fiber sculpture called “Creepy Crawly.” In these works, Andrews combines patterns and shapes that should logically clash or that seem totally random in a manner you would expect to be ugly and makes them unexpectedly beautiful. The two quilts are oddly shaped with pieces jutting out here and there almost like arms and legs on badly constructed clothing. They are made up of jarringly contrasting print patterns with squiggly stitched lines superimposed. “Creepy Crawly” is a loosely woven wall hanging in bright red, pink and white yarn surrounding and interwoven with a strange foam and plastic shape that looks a lot like a section of human intestines — again, making ugly beautiful.

Totally different from everything else in the show and really enjoyable are a set of photographs by William Hundley, even if all but one of them constitute a kind of one-trick pony. In each picture, a shapeless cloth hovers in the air in a gravity defying act. To me it looked like the cloths were inserted using Photoshop, but I was told that there was someone under the cloths who leapt into the air as Hundley snapped the shutter. The one picture in the set that is not just a repetition of the same trick is the one nearest the window, which shows an old man seated on a chair in front of a building with a pair of mops leaning against the wall. The cloth leaps up in such a way as to look like it is being propped up by the mop handles, so there’s more than just the one trick going on. Plus, there is a white cameo face on the bright green wall that is an almost hypnotic figure that serves as an anchor to everything else. In terms of composition, color, design and inventiveness, this is a terrific photograph.