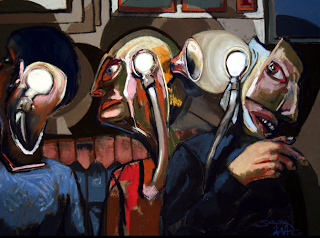 
I really like Ric Hall and Ron Schmitt’s collaborative pastels. It is absolutely astonishing that two artists can work simultaneously on a painting — and apparently, judging from their written statements, with little or no preplanning — and come up with anything as coherent and well designed as the pictures they are showing at Mad Hat Tea Company. It’s as if these guys are cojoined twins with a single brain between them.

Their paintings are figurative and surrealistic with echoes of Picasso and of German Expressionists such as Otto Dix and Max Beckman; one painting titled “Beckman’s Legacy” is an obvious homage to the latter. These are dark and disturbing paintings. Or they may be seen as humorous in a twisted sort of way, depending on how warped your sense of humor is.

Although their oeuvre covers the entire range of humanity, from sports to music to family life and more, their show at Mat Hat Tea Company focuses mostly on nightlife and on a kind of revelatory autobiography — but whose biography? Hall’s or Schmitt’s? Could it be that both of them were smothered in childhood by the engulfing love of slovenly aunts? The painting “Summers With My Aunts” pictures a frightened young boy, just entering puberty, seated between two women wearing yellow bathing suits and pressing against him in a way that looks to be sexually charged and uncomfortable.

Sex — clearly discomforting or unsatisfying sex — rears its head in many of Hall and Schmitt’s paintings. Take “Grabbing Mother Nature’s Bounty” for example. This painting depicts the Adam and Eve story, but in this one the apple tree is not a tree. It is a voluptuous naked woman with sickly, green skin and a zipper down the middle of her body from neck to crotch. Adam and Eve stand on either side of her (Adam naked and Eve wearing a white tank top and fig leaf). Adam reaches a hand into the open zipper front.

Another that packs a sexual wallop without being pornographic is “Inhibitions Discarded,” which pictures a woman in a red dress dancing in front of a couple and a single man drinking in a cabana bar. Her dance is masturbatory, and the people watching are clearly discomforted by being made into voyeurs.

These paintings are inventive and beautifully designed with dark, rich colors and an expressive surface quality more akin to acrylic painting than pastel. Like paintings by the French Post-Impressionist Georges Roualt with his vibrant colors outlined in heavy black.
One of the most astounding works in the show, which thematically comes out of left field, is “The Edison Project.” The meaning is unclear except that it refers to the inventor of the incandescent lightbulb. In this painting, lightbulbs have been implanted into the heads of dark and menacing men. The dramatic impact is as powerful as an electric shock.

Not so dramatic but interesting for its clever use of perspective is “Toast to the Way Things Were,” which shows diners at a table that becomes a road in a painting going off into the distance with a kind of Renee Magritte-like perspectival trickery.

The lighting at Mad Hat is designed for customer comfort, not for viewing art, and Hall and Schmitt’s work is anything but comforting. Nevertheless, this work is worth viewing. I highly recommend perusing Hall and Schmitt’s Web site at www.schmitt-hall-studios.com where sex and violence — the twin peaks of drama — are even more in evidence.

Hall and Schmitt’s work fills the back lounge area and the serving area of Mad Hat. In the front room are works by Mary K. Johnson that graphically display her anger at the current regime in the other Washington.