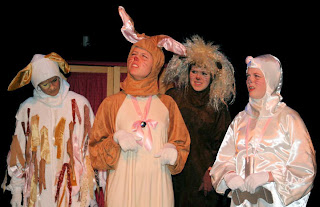 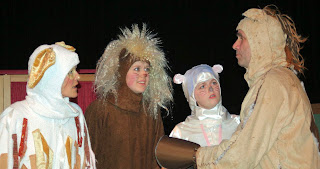 
The New Toy -
The older toys inspect the Velveteen Rabbit upon his arrival in the nursery. (L. to R. Anne Weldon, Rachel Gutfreund, Maxine Peabody, and Mandy Ryle).

I cannot emphasize this enough: If you are the parent or guardian of children ages 4 and older, take them to see “The Velveteen Rabbit.” This delightful children’s play put on by Olympia Family Theater at the South Puget Sound Community College’s Minnaert Center for the Arts is highly entertaining. It is also educational and might even be good for your child.

“We are passionate about offering our community an alternative to mass media entertainment, to explore complex themes and important issues in a dramatic setting,” reads the OFT mission statement printed in the program. “Our goal is to present children’s theater that not only entertains, but also stimulates dialogue and personal growth for young people and their families.”

Having watched “The Velveteen Rabbit” with a sold-out audience of children and their adult chaperones, I am convinced that this performance perfectly fulfills that mission statement.

Alex (13-year-old Jonny Buehler) has broken his favorite sleep-with toy into smithereens, and it cannot be put back together. His Nana (Evelyn McNitt) digs an old-fashioned velveteen rabbit out of his toy box and gives it to him as a substitute. Alex gradually learns to love the rabbit, which comes to life along with other toys in the toy box when the boy is asleep or away.

The Velveteen Rabbit (Rachel Gutfreund) is told by the Toy Fairy (Stephanie Kroschel) that if she is loved by Alex and loves him in return, her dream of becoming a real rabbit can come true. But the Velveteen Rabbit knows that is impossible because she doesn’t have a heart, and without a heart she cannot love.

The other toys – Timothy (Maxine Peabody), Wind Up Mouse (Mandy Ryle) and Bulka (Anne Weldon) – do not like Velveteen Rabbit at first because she is different. But the wise and loving Skin Horse (Keith Eisner), who is a father figure to the other toys, convinces Velveteen Rabbit and the other toys that being different is a good thing. And they truly begin to love her when Alex is stricken with scarlet fever and only Velveteen Rabbit’s love for him can save him from the fever – which he and the toys call “The Scarlet Fear.”

The set by Jen Ryle has just the right vintage look, with a big skin horse that looks like it was rescued from a 1920s merry-go-round and an oversized bottomless toy box (the living toys magically pop in and out of the toy box and the wardrobe).

Samantha Chandler’s direction is outstanding, which is especially noticeable in the complicated blocking and timing of the madcap “Find the Rabbit” scene – a scene that invites enthusiastic participation from children (and adults) in the audience.

The acting, overall, is excellent, proving that amateur actors and relatively inexperienced youths can be thoroughly professional. Most remarkable are Eisner, Gutfreund and Buehler in the three lead roles.

Eisner is an old hand in regional theater and has proved his ability to inhabit a seemingly endless variety of personas. He has been a pirate in “Treasure Island,” a dead man in “Proof” and a man with serious bladder problems in “Picasso at the Lapin Agile.” Here he is a lovable horse whose deep love for the Velveteen Rabbit comes across as totally sincere.

Gutfreund, a recent college graduate, twitters and blinks and hops about nervously and adorably (but rather clumsily on the hopping). What kid wouldn’t want her (actually a boy rabbit in this play) as his or her special sleep-with toy? And Buehler creates true sympathy for the boy Alex.

As of this writing, Sunday’s matinée is sold out. There are very few tickets left, so get yours soon.