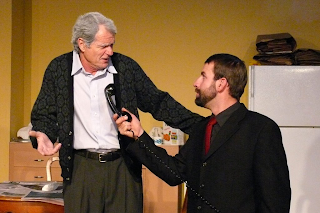 This weekend is the last chance to see “Visiting Mr. Green” at Olympia Little Theatre.

“Mr. Green” is a delicate blend of humor and drama and an unflinching look into the lives of two very different people – a lonely and bitter old Jewish man and an ambitious young man who happens to also be Jewish but isn’t religious and is only marginally aware of his heritage.

A near accident and a judge with an unusual sense of civic service bring them together after the old man, Mr. Green (Patrick McCabe), wanders into traffic and is almost hit by a speeding Ross Gardiner (Timothy Scott). As retribution for almost running into the old man, Ross is ordered to visit Mr. Green once a week for six months and help him out with whatever may be needed – such as housecleaning, shopping, etc., none of which Mr. Green wants or needs.

The play starts out as acerbic comedy in the style of “The Odd Couple,” as the two men haltingly get to know each other. They could not be less alike. Mr. Green is a slob and a pack rat. His apartment is littered with old newspapers, and his cupboards are bare. He doesn’t trust or like anyone and prefers to be left alone. Ross is a neat freak who insists on cleaning up and meddling into Mr. Green’s life even while claiming he doesn’t want to be there.

The comedy gradually turns into intense drama as the two men burrow into each other’s secrets. Ross confesses that he is gay and painfully closeted, that his parents have virtually disowned him and that he has shamefully rejected the man he loves out of fear of being out in public. Mr. Green is at first horrified by Ross’ confession. He can’t believe that a Jewish boy can be gay; he spouts off old worn-out myths about homosexuality and insists that Ross just needs to find a good Jewish girl.

And then almost by accident Mr. Green confesses a dark secret of his own.

The play by Jeff Baron received bad reviews when it opened in New York with the great Eli Wallach in the role of Mr. Green. While praising Wallach, critics complained that the script was predictable, that the basic premise was improbable and that both the humor and the drama were strained. While objectively I can understand this criticism, emotionally I was swept up into the story and the lives of these two men. I laughed heartily at the barbs Mr. Green threw at Ross, and I deeply felt each man’s pain.

McCabe plays Mr. Green beautifully. I often find that, when young actors play older characters, they look ridiculous. More often than not, their makeup and their gestures and their creaky old voices are all overdone. Not so with McCabe. Other than hair that’s a little too thick and coated with white, he looks every bit the 86-year-old man. And his old man’s shuffle and shaky right hand are believable. His small facial gestures speak eloquently. This is acting of a high order.

The only complaint I have is with the scene changes in which stage hands come out and either scatter newspapers and tissues or pick them up. Such interludes unnecessarily dispel the illusions upon which drama is based. I believe that whenever possible the shuffling of props by stagehands within full view of the audience should be avoided, and in this play most of it could be avoided by having the actors themselves move things during the scenes and leaving some of the changes to the audience’s imagination.

“Visiting Mr. Green” is a powerful, moving and humorous play. I highly recommend it.