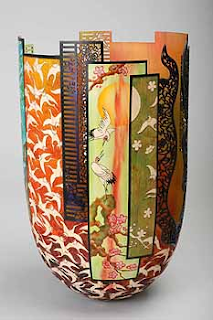 As the wood turns at American Art Com
published in The Weekly Volcano, May 3, 2007
pictured: “Cranes in Four Seasons” by Binh Pho.
The 7th North American Sculptural Wood Invitational at American Art Company is an audacious show. How these artisans do what they do with wood boggles the mind. The media is turned wood, which, strictly speaking, means carving forms out wood that is turned on a lathe. But these artisans are anything but purists; the objects they make often involve methods other than, or in addition to turning wood. Many of the pieces look like ceramics, glass, metal and other materials. The forms tend toward shapes associated most often with pottery, be they ornate or classical.
Binh Pho’s “Cranes in Four Seasons” is one of the most fabulous craft items I’ve ever laid eyes upon. It is a classical urn broken into many sections that appear to be on many overlapping levels, although they’re really not. Or are they? It’s hard to tell. Each section is decorated with etched images of birds in flight, or traditional Asian landscapes, or elaborate carvings that look like wrought iron gates or slatted window shades. The colors are rich and luminous, and some of the carving is so delicate the gallery had to place it under glass for protection. You can’t buy this piece. Someone already did. But you can and should look at it.
Although many of the artworks look like anything but wood, a few emphasis the native qualities and textures of the material. Seth Roland’s “Beacon” uses contrasts of color and texture to highlight the natural grain of wood. It looks like a simple plank standing on end with what appears to be a white stone embedded near the top, as if it had been thrown with great force and stuck there. Grooves radiate outward from the white-wood pseudo stone.
Two of my favorite pieces are John Skau’s “Offset Diamonds” and “Bow Ties.” Both are painted and varnished double-weave vessels of cherry, maple, and poplar. Wow! That’s a mouthful. Try to say it fast. Each of these is a slightly rounded, wall-hung, convex square with woven square and diamond patterns that create illusions of great depth.
Milo Mirabelli’s “Water Tower” looks exactly like what the title implies. What makes it fascinating is that it defies structural believability. The heavy wooden bowl rests on spindly legs that look like popsicle sticks that may break at any moment.
Donald Derry has been in many of the wood shows at American Art Company. In the past, I have been impressed with the depth and brilliance of his color. His newest works, “Life Can be Hard” and Fired Up,” offer up almost grotesquely ornamental shapes not seen in previous shows — at least not around here. They verge on the realm of so-ugly-they’re-beautiful. I love them.
Robert Cutler’s “Showtime” is a classically simple covered bowl with ornate surface decorations reminiscent of a Tiffany lamp. It’s truly beautiful. And it is sold. Come to think of it, nearly all my favorites in this show have sold already. Oh well, I couldn’t afford any of them anyway.
Other works that go all out to emphasize the natural grains of wood include Trent Bosch’s “Extended Family” and “Tightly Twisted.” Both feature wooden shapes like baseball bats that extend from bronze collars.
Another favorite of mine is Betty Scarpino’s “Disobedient Currents." Made of maple that is turned, carved, bleached, painted, textured, and stippled, it is a plate form that looks more like rough stone than wood.
One other piece I have to mention is Ben Carpenter’s “Black Orchid,” which looks like some kind of spiky shellfish. A crab with black spike legs.
Other than the pieces I have mentioned here, few of the pieces in this show are artistically astounding. But they are technically astounding. The shapes are, for the most part, traditional; and most of them rely on a few simple tricks of the trade, such as the juxtaposition of blending and contrasting shapes, colors and textures. Having stated that caveat, I must say that most of the works in this show are simply breathtakingly beautiful.
If they’re so beautiful, you might ask, then why aren’t they art? Sorry, that’s too big a subject for this column.
Posted by Alec Clayton at 10:20 AM