Here’s a ‘Flea’ you will want to catch 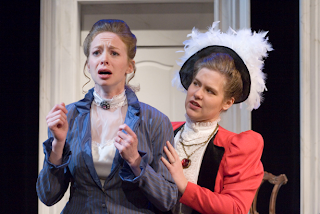 review: "A Flea in Her Ear" at Centerstage

Published in The News Tribune, May 25, 2007
photo: Vanessa Clayton as Raymonde (L) and Kate Ryan as
Lucienne. Photo by Michelle Smith Lewis

Whenever you see more than two doors on a theatrical set, you can be assured that characters are going to rush in and out in a comedic frenzy.

It’s the oldest shtick in show business – the oldest, that is, next to mistaken identity. But just when I thought I could not stand to sit through another one, Centerstage at the Knutzen Family Theatre in Federal Way opened the granddaddy of them all, the one that invented the genre way back in 1907 – Georges Feydeau’s “A Flea in Her Ear.”

Feydeau popularized the genre known as French farce, and “Flea” – now in its 100th year – is his most well-known play. “It’s the archetypal farce: Timing is everything. It’s a door-slamming, pants-dropping comedy that’s full of naughty, sexy romance and clockwork precision. It’s a real challenge for the actors, who rarely have the opportunity to perform with such technical excellence demanded of them,” said director Alan Bryce, pointing out that there are no less than 279 entrances and exits in the play.

“Flea” is a sex comedy that is as modern after 100 years as an episode of “Grey’s Anatomy” is today.

In what may well be the first-ever literary reference to erectile dysfunction, Victor-Emmanuel Chandebise (Sean Mitchell) finds himself unable to have sex with his wife, Raymonde (Vanessa Clayton). This, combined with the mysterious arrival of
Victor-Emmanuel’s suspenders in a box mailed anonymously from the notorious Hotel Coq D’Or, leads Raymonde to believe her husband is having an affair. She gets a dangerous flea in her ear (“a flea in her ear” being the French equivalent of “a bee in her bonnet”) and decides to find out for sure by sending him a letter from a pretend secret admirer proposing a romantic rendezvous in the Hotel Coq D’Or. If he goes to the hotel, she will know he is cheating.

In the meantime, Raymonde is having an affair of sorts with the family friend Tournel (Mark Rabe), a tall, mustachioed and notorious womanizer. Victor-Emmanuel’s nephew, Camille (Lance Channing), who has a bizarre speech impediment, and the family doctor, Finache (Alan Wilkie), seek sexual adventures at the infamous Coq D’Or. It is no surprise that all of these characters, and many more, are going to end up in the hotel at the same time, running in and out of rooms and hopping in and out of a revolving bed with one another.

The direction and timing in this farce are immaculate. The acting verges on being overly mannered, and the comedy verges on overly ridiculous, but necessarily so.

Just when you think, a little more than halfway through Act II, that the absurdities are getting out of hand, it becomes even more absurd. Modifiers such as ludicrous and ridiculous don’t even begin to describe it. It enters a whole new realm of ridiculousness as it becomes a kind of madcap ballet of frantic action. You’ll have to see it to believe it. The closest things I can compare it to would be some of the Marx Brothers’ frantically choreographed scenes or Lucille Ball dancing in wine vats. Only an outstanding director could pull off the end of Act II.

All of the cast are commendable, but four stand out: Clayton and Mitchell as the lead couple; Channing, a real scene stealer in the minor role as Camille; and Olympe (Loretta Deranleau Howard) as the hotel owner’s wife – a lusty and expressive wench.

At two hours and 40 minutes including two intermissions, it is a long play. But the time flies by.