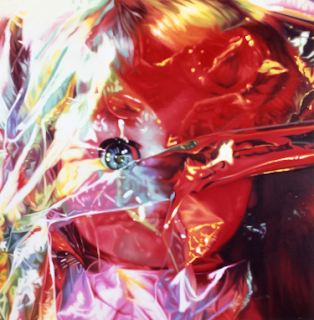 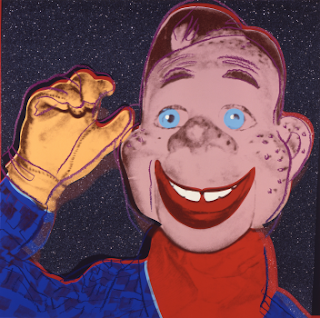 Sparkle Then Fade at Tacoma Art MuseumPublished in the Weekly Volcano May 31, 2007

TAM’s got glitz. The new show called “Sparkle Then Fade” at Tacoma Art Museum is cool. Not necessarily great, mind you, but cool. There are some great artworks in this show, but also some that are downright stupid.

It’s all about glitz, glamour, celebrity, the media — and how all of these things can be a flash in the pan that quickly fades.

It slaps you upside the head the moment you walk in the door with a video installation from assume vivid astro focus. This wall-size projection is actually a loop of two videos: “Pills & Cigarettes” and “Freebird,” that cycle quickly and endlessly with soft-focus disco imagery. It’s all flash and fast movement and, I think, boring and outdated.

Much more interesting to me are the Andy Warhol prints and Alice Wheeler photographs to the left of the gallery entrance, which epitomize the show’s theme much more directly and with more inventiveness and pure pizzazz. Warhol’s four prints are the only portraits he ever did of fictional characters. Warhol’s Santa Claus, the Wicked Witch of the West, Howdy Doody and Uncle Sam were screen printed in a style made famous by his portraits of actual celebs such as Marilyn Monroe and Elvis. The funky colors and off-register printing (Warhol trademarks) are beautiful; and he tops it off by coating everything with diamond dust. Wheeler is showing two 45-by-65-inch photographs of rock stars: “Revolution Grrrl Style now, Bikini Kill at the X-Ray Café, Portland, Oregon, 1993” and “Kurt Kobain (glasses) at MTX’s Live & Loud Pier 63 Seattle Dec. 13, 1993.” These two photographs need no explanation. The titles tell it all. They are mesmerizing in the way assume vivid astro focus wishes their videos were.

Also mesmerizing, not to mention downright genius in a tongue-and-cheek sort of way, is “United We Stand” by 0100101110101101.org, aka Eva and Franco Mattes. “United We Stand” is a complete advertising campaign for a non-existent movie starring Penelope Cruz and Ewan McGregor. Shown here is a poster advertising the non-film. Surely a good computer geek could figure out what all those zeroes and ones mean, and I wish someone would let me know.

Most fascinating is Kathryn Dyke’s “Knowing You, Knowing Me,” an 80-by-80-by-80-inch enclosure of little mirrors, each about the size of a sand dollar, that hang from the ceiling to create a kind of room-within-a-room of mirrored veils. What fun to view the other art through this and see your own broken reflections!
Jeff Koons’ “Inflatable Balloon Flower (Yellow)” is a huge disappointment. But then Koons typically disappoints as often as he pleases. His work tends to be either audaciously inventive or terribly stupid. This oversized twist-tie balloon flower breaks the scale on the stupid side.

Equally dumb is Jim Hodges’ “Coming Through,” which is nothing but a bunch of naked light bulbs on a plywood panel. The glare is so overwhelming. It hurts to look at it.
Also highly inventive is Donald Moffett’s multi-part tribute to the civil rights leader Barbara Jordan, which includes a video of Jordan delivering a speech to the legislature projected on a canvas coated with sparkling enamel paint.

The best pure paintings in the exhibition are Jeffrey Simmons “Flux” and “Scatter and Amass.” These are both updates on 1960’s-style Op Art using Mylar and resin to accentuate the optical illusions.

One of the best concepts is Monique van Genderen’s “a fondness for fairytales and a love of cash…” It consists of two walls, one with large abstract shapes and one solid black. The black wall is supposed to reflect the images on the other wall, along with all the other art in the gallery. But I couldn’t see any reflection at all. Perhaps it was an unfortunate trick of lighting at the time I happened to be there.

This is an exciting show despite a few failures.