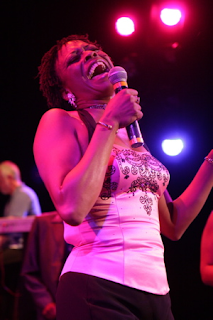 Singers, dancers, musicians – and most definitely audience members – turn Harlequin Productions’ State Theater into a rocking concert venue, as they do every summer with their rock and soul reviews.
There’s history to this newly minted tradition. The seeds for an annual rock review were planted with Harlequin’s rock musicals “The Rocky Horror Show” and “A Rock and Roll Twelfth Night.” Then in the summer of 2004 came the Motown review “Dancin’ in the Streets,” and something unexpected happened. Audience members were so moved by the rocking music that they leapt out of their seats and started dancing in the aisles.
It was such a spontaneous explosion of unbridled glee and proved to be so popular that the next summer the company put on a second Motown review, appropriately called “Dancin’ in the Isles,” and they shortened the stage to create a dance floor between the proscenium and the audience. Performers jumped off the stage and encouraged audience members to get up and dance. Then came last summer’s “Let the Good Times Roll,” a variation on the theme, but this time honoring the great stars of Atlantic Records.
“Soul on Fire!” is another tribute to great acts such as James Brown, Sly and the Family Stone, Ike and Tina Turner, Aretha Franklin, the Isley Brothers and the Righteous Brothers. There is no story line; there are no characters and no acting other than gestures that convey emotion. It is just two hours of soulful singing.
The singers are Antonia Darlene, Kenny “KJ” Jones, Shaw Lathrop, Selena Whitaker-Paquiet and Shaunyce Omar. This performance marks the Harlequin debut for all but Darlene, who starred in Harlequin’s “The Twelfth Night of Stardust” and was seen in “Dreamgirls” at Tacoma Little Theatre and “Ain’t Misbehavin’” at Capital Playhouse. They are all good singers who attack the songs with energy and lots of soul.
This show is as much a showcase for the band as it is for the singers. And what a band it is – with David Broyles on guitar; Tracey D. Hooker, trumpet; Rick Jarvela, bass; Maria Joyner, drums; Steve Munger, saxophone; and musical director Bruce Whitney on keyboard.
Pick your highlights. Almost every song is bound to resonate with someone, and it was clear on the night I attended that almost every song has the power to get people off their seats and dancing in the aisles, or at the very least swaying in their seats and clapping hands in time with the music. I compared it to a rock concert. Maybe so, but a gospel meeting may be a better analogy.
The highlights included the great Tina Turner hit “What’s Love Got to Do With It” sung by Omar with a great call-and-response voice-and-saxophone duet in which Munger’s sax harmonized with Omar’s voice, and the other great Tina Turner song “Proud Mary” as sung by Whitaker-Paquiet.
Another highlight was the mellow and moving “You’ve Lost That Lovin’ Feeling” with Lathrop and Jones harmonizing in a spot-on imitation of Bill Medley and Bobby Hatfield.
Lathrop, who reminds me a lot of R.E.M’s Michael Stipe but whose energy level is much higher, shone on the opening number, “Gimme Some Lovin’” and later on “Devil With a Blue Dress On.” Watching him dance – especially while Darlene and company belt out the closing number, the Isley Brothers’ “Shout” – is simultaneously exhausting and soul-stirring.
Bring your dancin’ shoes, and if you wear hearing aids, leave them at home.
WHEN: 8 p.m. Thursdays-Saturdays, 2 p.m. Sundays through July 8
WHERE: State Theatre, 202 E. Fourth Ave., Olympia
TICKETS: $34-$38, rush tickets available half-hour before curtain
INFORMATION: 360-786-0151; http://www.harlequinproductions.org/
Posted by Alec Clayton at 8:46 AM