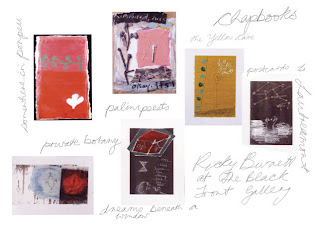 Ricky Burnett’s modern art rocks at Black Front Gallery
Published in the Weekly Volcano June 14, 2007
Pictured: Ricky Burnett announcement card courtesy Black Front Gallery
The smug know-it-all who gleefully dismisses “modern” art with statements like “a trained monkey could do that” or “my 3-year-old child could do better” should have a field day with Ricky Burnett’s show at Black Front Gallery. Burnett’s work is raw, gritty, sloppy, and definitely looks (to the untrained eye) like something a 3-year-old might do. I love it.
It’s also well composed with rich surfaces and elegantly blunt lines and thought-provoking subject matter. And by the way, the reason I put “modern” in quotes is because the type of art Mr. Know-it-all derides as modern has been around more than 100 years now. How long does a thing have to be around before it is no longer modern?
Internationally known as a curator and teacher from South Africa, Burnett moved to the little town of Rainer, Wash., a few years ago. This is his first show in the South Sound region. He is showing drawings, paintings and collages on paper, wood panels and silicone gel. Called chapbooks, these works are pages from books of poetry.
Burnett explains that he set out to make illustrations for the surrealistic poetry book “Maldoror” by Isodore Ducasse, who goes by the pen name Lautreamont. Burnett writes: “I ended up however, so far from any specific textual references that to call them illustrations makes no sense at all. So I’ve chosen, instead, to call them ‘postcards.’ The Lautreamont project induced a shift in my thinking. It suggested that it was possible to see my work as page-making rather than picture-making. I have no clear understanding why this simple re-phrasing should have been so liberating or so useful, but it was and is.”
The title piece, “Postcards to Lautreamont #1-9,” is a set of nine paintings on paper with figures of animals and constellations drawn with fine white lines that are incised into areas of heavy black paint with a few slabs of red, blue or gold.
“Dreams Beneath a Window #1-9” is a similar group of nine drawings but with human figures and snatches of poetry. As in the “Lautreamont” series, the fine white lines are created by scratching into black to expose the white paper below — a look similar to scratchboard technique but much rougher. Here’s a sample of the poetry hand drawn into these paintings: “down it grows to come and go/death needs sex and beauty/hohoho!”
Allusions to death and sex appear in a number of his works.
Very intriguing is a two-part work called “Insomnia Sworn,” which consists of blobs of silicone gel and lavalike drips of lead attached to the wall with Velcro. Small drawings and collages can be seen through the amber-colored gel. They’re like ancient art found in some archeological dig.
Similarly, “Somewhere in Pompeii” looks like a random scattering of fresco shards recovered from the ruins of Pompeii. The rich red, gold and red-violet colors are so intense they almost hurt the eye. The random positioning of the many pieces in this arrangement does not work well, and some parts are too high for comfortable viewing.
I think the most successful works in the show are two groups from the same series: “The Yellow Cave #1-4” and “The Yellow Cave #1-15.” These are similar in style to the “Lautreamont” series, but all are painted on a yellow ground with a repeating motif of feet and skeleton heads with flowers and snatches of surrealistic poetry. The paper is torn and gouged.
I can’t help thinking of other artists who may or may not have directly influenced Burnett but who display similar styles and attitudes. I’m thinking in particular of Jean-Michel Basquiat, Susan Rothenberg and Kenneth Patchin. Two of those are dead, so now there’s only Susan Rothenberg and Ricky Burnett.
I counted 74 works of art on the wall. That’s a lot for such a small gallery. This is a show that’s definitely worth seeing.
[Black Front Gallery, “Chapbooks,” through June 27 Sunday through Thursday 11 a.m. to 7 p.m., Friday-Saturday 11 a.m. to 9 p.m., 106 Fourth Ave. E., Olympia, 360.786.6032, http://theblackfrontgallery.com/]
Posted by Alec Clayton at 10:06 AM