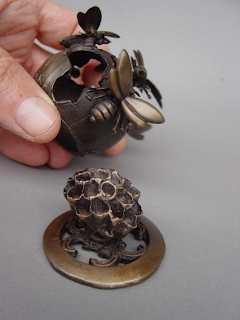 A.O.C. Gallery’s group show is a little something for everyone
Published in the Weekly Volcano, June 21, 2007
Pictured: “MiniGlobe Storkfeet,” bronze sculpture by Kathy RossPhoto: Courtesy Photo
The opening show at A.O.C. Gallery (formerly Art on Center) is essentially a one-person show starring Kathy Ross, with two other artists thrown in — Dave R. Davison and Peggy Bennett.
Davison is showing a group of mostly blue figure paintings on the back wall that look a lot like some of Picasso’s late cubist figures, with the blue color scheme being, perhaps, a nod to an earlier Picasso period. On a table in front of his paintings are a group of little David Smith-like sculptures. I particularly like their grungy surfaces.
Bennett makes human-size voodoo dolls that are well done and strikingly in-your-face, but not unlike a thousand other art dolls by so-called outsider artists. These dolls also create an uncomfortable backdrop for the free-standing Ross sculptures that are displayed on pedestals. In a different setting, Davison and Bennett’s work may look better, but they are not a good compliment to Ross’s strangely inventive and exquisitely crafted sculptures.
No doubt gallery owners CJ Swanson and David N. Goldberg know that Ross’s work merits a one-person show, but they have learned that Tacomans won’t turn out in sufficient numbers to see a one person show, so they have to bolster their efforts with a little variety — a little something for everybody.
Now, on to the main attraction. Ross makes deliciously subversive little figurines — mostly human figures or portrait busts with all kinds of strange attachments and outgrowths. There are Cyclops heads, both human and animal, with a single eye and no other features or with multiple, non-human features. There are heads that sprout animals and buildings. There are heads with hands for ears, hands that balance worlds and worlds on spindly fingers. There are figures with bronze clothing and body parts that can be rearranged (specifically one called “Willingness to change, Tea Party Outfit” that includes a detachable torso that turns the figure into a hermaphrodite).
The best of Ross’s works are her miniature sculptures, which sport fine details so tiny you almost need to view them through a magnifying glass. Among these are her two alphabets: “Baby Alphabet I” and “Baby Alphabet II.” Each of these presents 26 tiny bronze babies with strange heads, each head representing a letter of the alphabet: (A) acorn, (B) bee, (C) corn, (D) dove, (E) eye (another Cyclops; she seems to have a thing for Cyclops), (F) flamingo … and on through to (W) woman, (X) Xerox, and (Z) zipper.
Another amazing miniature work is “Us vs. Them: The Mouse Wars.” Armies of microscopic figures are arranged on a glass-covered circular stand that measures perhaps 2 feet in diameter. I had to lean over and almost touch my eye to the glass in order to see what these little figures are. They are baby warriors carrying shields and guns and swords and riding on the backs of mice. Whole armies of them, each about the size of your thumb.
Of her larger works, I was particularly impressed with “Self #1 (brick)” — a portrait bust of a man whose head is made of brick that is, in fact, a house with numerous Escher-like doors and windows opening into an interior where ladders to nowhere lean at odd angles. I also like its companion, “Self #2 (head with little people)” — another bust of a man. This one has jigsaw pieces for one ear and a little house growing out of his other ear. Three figures stand on top of his head, and men with dog heads perch on his shoulders. Oh, and one of the men standing on his head has an elephant head. Strange creatures, these.
Ross’s sculptures are terribly funny, and her craftsmanship is superb. The only pieces I did not like were her two versions of “Walnut People,” each representing a man and a woman curled into fetal positions and nested together to create the form of a walnut. The idea is clever, but the form is aesthetically clumsy.
This is the first show for the previously hard-to-find and much-too-small gallery on Center Street. I hope the improved location and larger space will lead to great success.
[A.O.C. Gallery, 608 S. Fawcett, Tacoma, 253.230.1673 or 253.627.8180]
Posted by Alec Clayton at 8:31 AM